Only the good die young. There’s probably some truth to this cliché saying that is often meant as a condolence.

But it doesn’t change the fact they are indeed gone from this world that they were trying to make into a better place.

Biker Sana Iqbal is one such do-gooder who’s gone too soon from amidst us.

At 4 am this morning, the celebrity woman biker Sana Iqbal died in a car crash in Narsingi, Hyderabad.

The 30-year-old died instantly when her estranged husband, 35-year-old Abdul Nadeem crashed their car into a road divider on their way to Gachibowli.

Nadeem has survived the accident albeit with injuries. He has two broken ribs and is being treated at a city hospital.

The police investigating the accident have determined the cause of the crash to be overspeeding and have booked Nadeem under Section 304 (A) (causing death by negligence) and 337 of IPC (causing hurt by endangering life or personal safety of others).

In an interview with TOI, sub-inspector Sudheer Kumar of Narsingi police station gave the following statement.

“Sana also sustained severe head injuries and fractured her arms and legs in the accident. Sana’s body was shifted to Osmania hospital for a post-mortem examination before handing it to family members for the funeral.”

Saba Khan, Sana’s sister recounted that Nadeem was waiting to meet Sana outside the gate of their house in Towlichowki when the latter returned from work at 2 am with her two-year-old son, Ali. 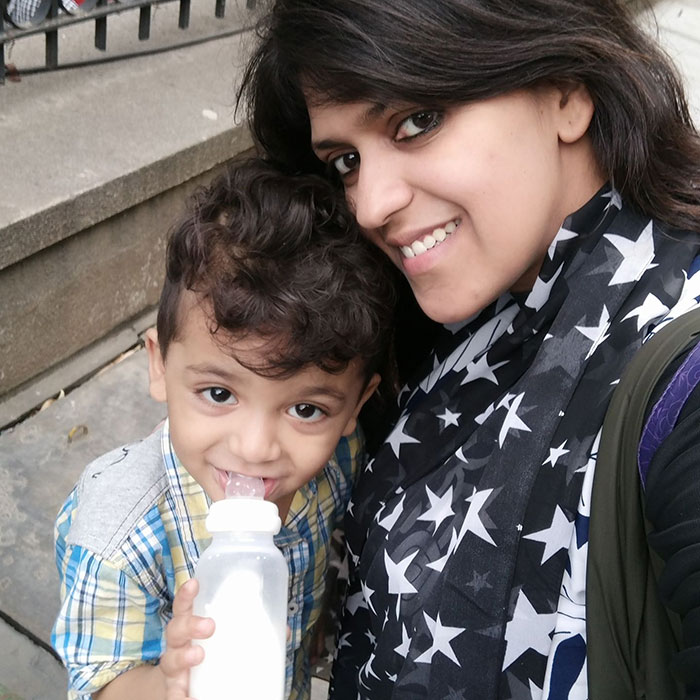 At around 2.30 am, Sana informed her sister that she was going with her husband and would be back in a few hours. Alas! That was not to be.

“She did not return.”

Five hours later, a friend of the couple visited Saba to inform her about the accident and that Sana’s condition was critical. Saba rushed along with Ali to the hospital where tragic news awaited them both.

“The doctor told me that my sister has passed away.”

Sana’s life was a story of self discovery and adventure. But before she became the person that inspired many, she struggled with depression. At the age of 27, she had a death wish. She tried to commit suicide on a bike trip to Gujarat.

Sana loved riding bikes since she was in the seventh grade and wanted to depart from this world doing what she loved best. But her journey was a revelation. It opened her heart to peace and she wanted to help others with similar issues attain peace too.

She was even invited to give a TED talk about coming out of this dark period of her life.

In November 2015, Sana embarked on a solo cross-country bike trip from Goa to spread awareness about depression and suicide. In a span of six months, she had managed to bike through 2 countries, 111 cities, 29 states and 5 union territories, thereby becoming the first Indian woman to travel all of India and Nepal on bike.

In total, she had covered 38,000 km and conducted 135 seminars. Her psychology background and corporate training skills helped her reach out and get through to more and more people.

She received roaring support from various biking communities in the country and other organisations for her initiative.

The pain of her passing will not just be felt by her family but by all those whose lives she touched with her remarkable journey.

We hope you’ve found the peace you were looking for, Sana.