You may argue that the samosa crust is just nachos or papdi. But no. Unlike those two, samosa crusts are crispy on the outside and soft on the inside. And a good, perfectly salted crust defines how tasty a samosa is. To me, the filling is secondary.

So, a guy named Shreyas Doshi, who is a startup advisor, had taken to Twitter a couple of months back to host an online poll – In a samosa, which part do you enjoy more? And of course, ‘the crust’ won the majority of votes.

In a samosa, which part do you enjoy more?

Surprisingly, his poll was taken seriously by a food joint named Samosa Party who started selling buckets of just the samosa crust, also known as ‘samosa corners’, with their signature chutneys.

This, my friend, is what dreams are made of. 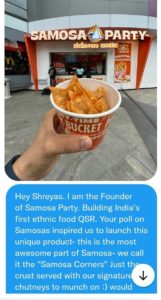 Turns out, the founder of the food joint was inspired by this poll and launched the snack ‘Samosa Corners’.

Since it is the season of turning Twitter polls into products, here’s real proof that this works:

The founder of @Samosa_Party just DM’ed me that they were inspired by my recent poll about samosa crust vs. filling and they’ve actually launched “Samosa Corners” 🤯

While some people online loved this idea and were dying to taste the dish, others compared it to nimkee and of course, nachos. Here’s what they said:

Seeing this I think bite sized Samosas in a bucket just like this would sell good. 😂

This reminds me of this time i bought a fancy le creuset wok. And then i realized its just a kadhai : hindi for wok, basic kitchen utensil, not that expensive.

what is the process to join this awesome party. I am from Indore and mad about Samosa. Any kind of Samosa.

Samosa fired with filling gives it’s crust the taste it has. Without the filling it’s a whole different product which tastes different.

Like if you take the bread out if pizza it’s salad.

I grew up in Dhanbad/Bihar.

Now waiting for food joints to come up with tiny bite-sized samosas to soothe the soul! 😀