During times when we’re battling the issue of rape, sexual harassment and abuse, the one thing we are trying to establish is the importance of the consent. I think it is safe to say that the importance of this can only be taught in childhood to both, boys and girls.

A lot of celebrities have been vocal about their views on how men do not understand consent and never take no for an answer.

However, Salman Khan and Jacqueline Fernandez recently got schooled by the netizens about the importance of consent when Salman forced a young boy to hug Jacqueline on a reality show.

The incident happened when the duo appeared on Dance Deewane to promote their upcoming film.

Jacqueline posted a video of the incident herself with a cute caption, totally unaware of what it was implying.

Kids usually love me, this boy was an exception.. at least I got my hug in the end 😜😝 #dancedeewane @beingsalmankhan @madhuridixitnene @anilskapoor

The kid clearly said he doesn’t feel like hugging her and Salman insisted that he does. Even when Jacqueline forcefully hugged him, the kid was reluctant and awkward.

Several users called them for their lack of respect for the child’s consent and decisions.

1. Or were you not thinking at all? 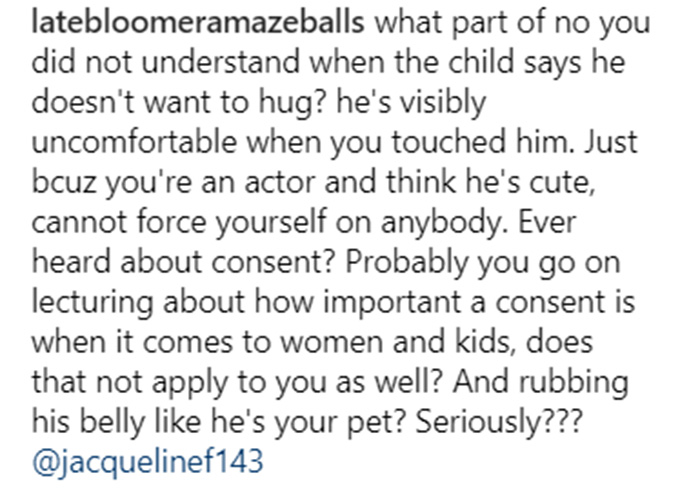 4. It’s not reserved for anyone. Everyone’s consent is important.

An article on the website Parents beautifully explains why children should never be forced to hug, give a kiss or any other form of physical affection if they don’t feel like it.

“Mitigating the hurt feelings of an adult isn’t an acceptable reason for steamrolling over someone else’s autonomy, no matter how young.”

“This idea that rejection should be avoided at all costs is really harmful and a vital part of rape culture.”

“Let the child choose what feels good to them” when it comes to saying goodbye. If you witness your child’s reluctance when asked for a hug, throw out a few alternatives. We like offering handshakes, high-fives, or a wave as we leave.”

There are so many awareness programs and efforts being made to teach parents how to pass on the importance of consent to their children at a young age. It is as important to teach a toddler as it is to a teenager or an adolescent.

Even if the show is scripted or if Salman and Jacqueline did it in ‘fun’, they indirectly sent out the message that the child’s consent to hug her or not wasn’t important. And that is not something people of their influence should indulge in.