The #MeToo movement continues to deliver one shocker after another. From media to Bollywood, sports to politics, the wave is hitting every field. To some, the names of alleged perpetrators are not a surprise. Which simply goes to say how rampant the ill treatment of women in these industries is.

Yesterday, two more Bollywood bigwigs’ names have been thrown into the list of alleged sexual predators.

Both of them are directors, and both have had crew members levelling accusations of rape and sexual harassment on them. One is veteran director Subhash Ghai and the other, director Sajid Khan.

Model-actress Saloni Chopra took to the blogging platform Medium to share the harassment she had to endure while working for Sajid Khan.

I finally decided to share my story with you. Writing this was like re-living all that horrible past I’d chosen to let go of, but I knew if I don’t today, I may never. So here’s #metoo #MetooIndia https://t.co/brouTYIBC7

Saloni talks about incidents dating back to 2011, when she had first moved to India and decided to work as an assistant director for Sajid Khan to learn about filmmaking.

In the post, she reveals horrific details of how Sajid allegedly would make ridiculous demands of her from time to time, telling her that she wasn’t an assitant director but literally a director’s assistant.

Here’s one of the incidents that she talks about, which prompted her to finally quit the torturous job that resulted in sexual and emotional abuse.

“This wasn’t about sex, it was about me being his little bitch and doing everything he told me to do.”

“He’d name directors that keep actresses at their homes for months and thats just how this works. He then said ‘you think I want to fuck you? I have such a hot girlfriend, why would I fuck a girl like you thats not even sexy?’ So I asked, almost pleading, what was it that he wanted from me? He said he wants me to do everything he tells me to. Stay with him. Maybe he’ll ask me to touch myself in front of him, maybe he’ll want to record it. He’ll do things to me and give me orgasm and teach me the art of sex but maybe he won’t actually put his dick inside me. Maybe he will. But it would be up to him what he wanted and if I thought casting couch was just about a one time sex then I was foolish. No one would cast me unless I was ready to be their ‘keep’.”

Another woman to come forward and accuse Sajid Khan of harassment is a freelance journalist.

She shared a tweet about an the time she had to interview the director and how he harassed her by exposing his genitals to her and not letting her leave.

Sajid Khan has preyed on women in the industry for years. Here's my story. #MeToo pic.twitter.com/Rufzs9dsp6

Both women have explicitly alleged that Sajid Khan’s behaviour was an open secret in the industry.

“I’ve told a lot of people about these incidents, and they usually laugh at the audacity the man had, or everyone just says, ‘Thats Sajid khan for you, he’s pulled off this shit with so many girls’. It was as though it’s just… accepted and known by everyone and no one cares enough to do anything about it because clearly he was working with some pretty big stars.”

Another actress, Rachel White, said that she believed Saloni and shared a similar encounter with Sajid Khan.

I said I was not comfortable meeting at home and to that he said “don’t worry I live with my mom and she’ll be around” I felt reassured and agreed. When I went to his house the maid directed me to his room and the drawing room was empty!! It was his bedroom

I stood like an idiot in one corner of the bedroom wondering where to sit and he was on one side on the treadmill. I clearly rem this episode. When he saw me walk in he goes “pls come this side” all smiling . I walk up towards the treadmill . He was directly staring down at me

I was in a white vest and blue denims and still felt I was standing nude with that gaze. What happens next is that he finishes his cardio and walks up to me asking me about my boobs and making that kind of conversation. I didn’t bother to answer to anything.

After that he asks me to strip for him bcoz there were scenes in a bikini and he needed to see how I looked. I replied saying “there are pics of me in bikinis sent to u,I think that should good for u” n wen he insisted I said “I’m ready to parade ur office in a binkini nt at home

Finally he goes “listen no one has a problem with these things” (and obviously named people) and that if I could seduce him in 5 mins the role was mine.
How this ended was me saying that I didn’t come mentally prepared for this and I left his house!

So yeah believe you with ur story. And I told u mine so that more people can believe you and stop making women look like attention seekers. 🙏

It’s an episode and probably the worst ever work meeting I’ve ever ever had ! And what it did is got me too scared to ever dream big , it did kill my aspirations temporarily till I got back to work , but became very conscious about approaching or meeting people for work.

However, the allegations against Subhash Ghai were quite the unexpected curveball. The same woman who outed comedian Utsav Chakraborty in her Twitter thread was approached by a survivor who wished to remain anonymous.

The woman has alleged that Ghai made sexual advances against her, and on another occasion, drugged her, took her to a hotel in Lonavla and raped her. 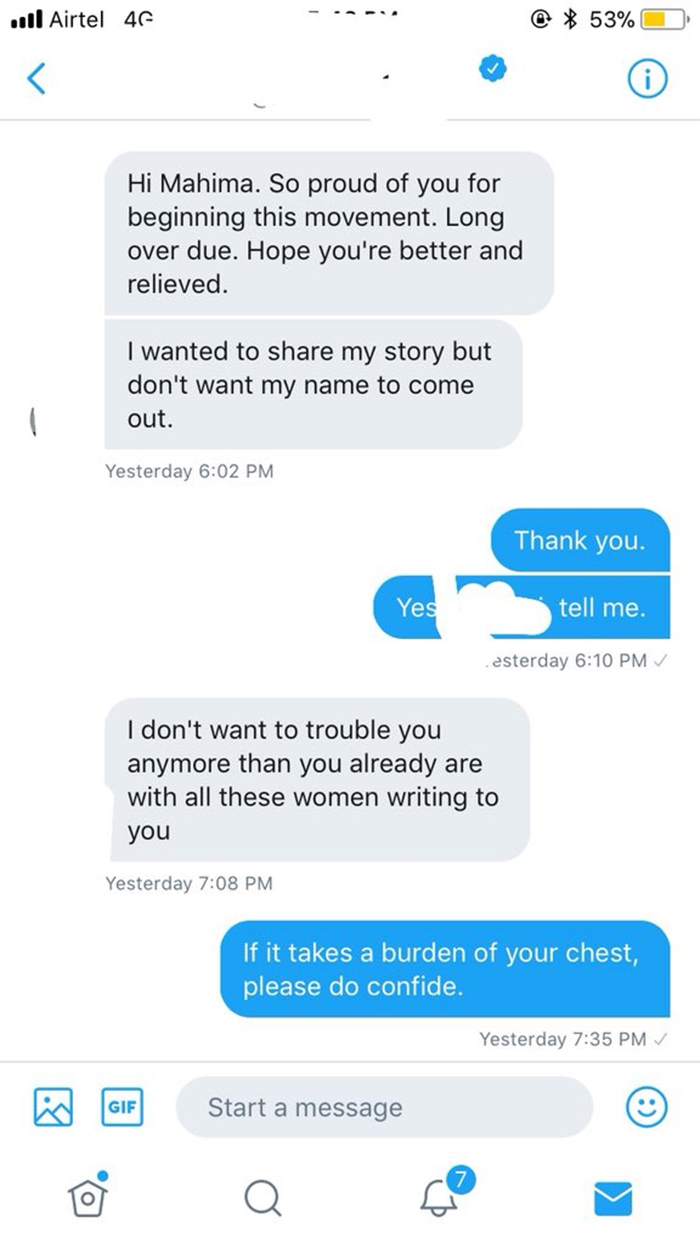 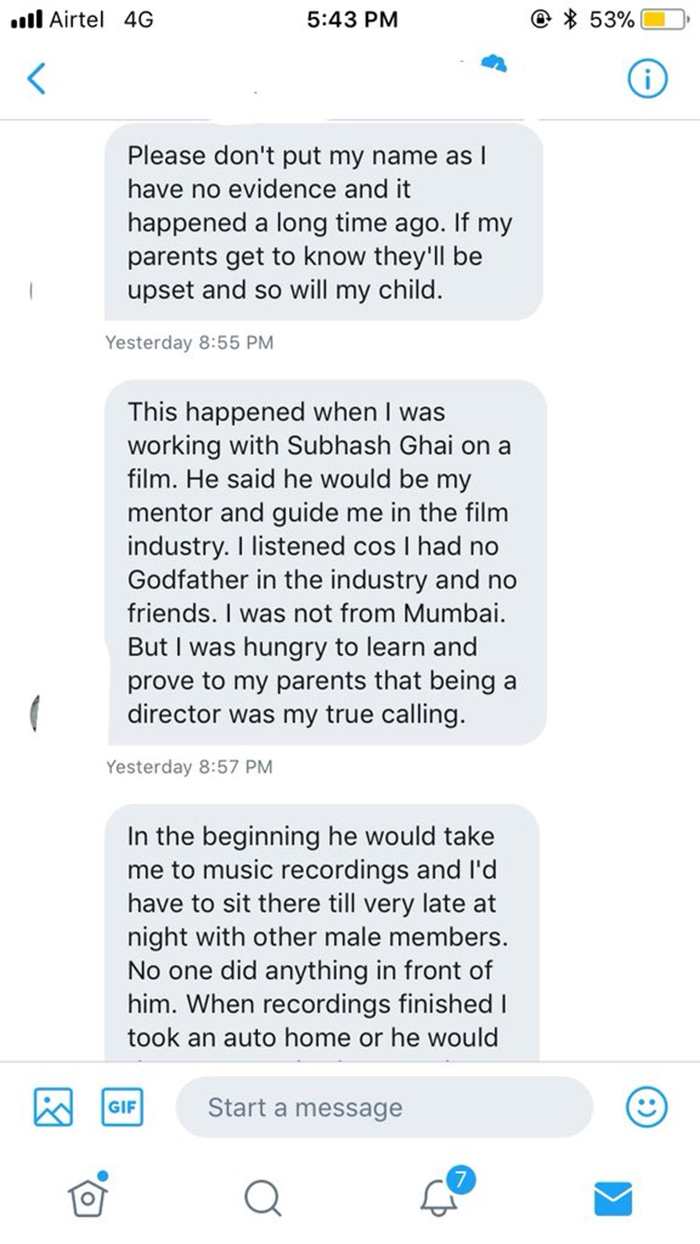 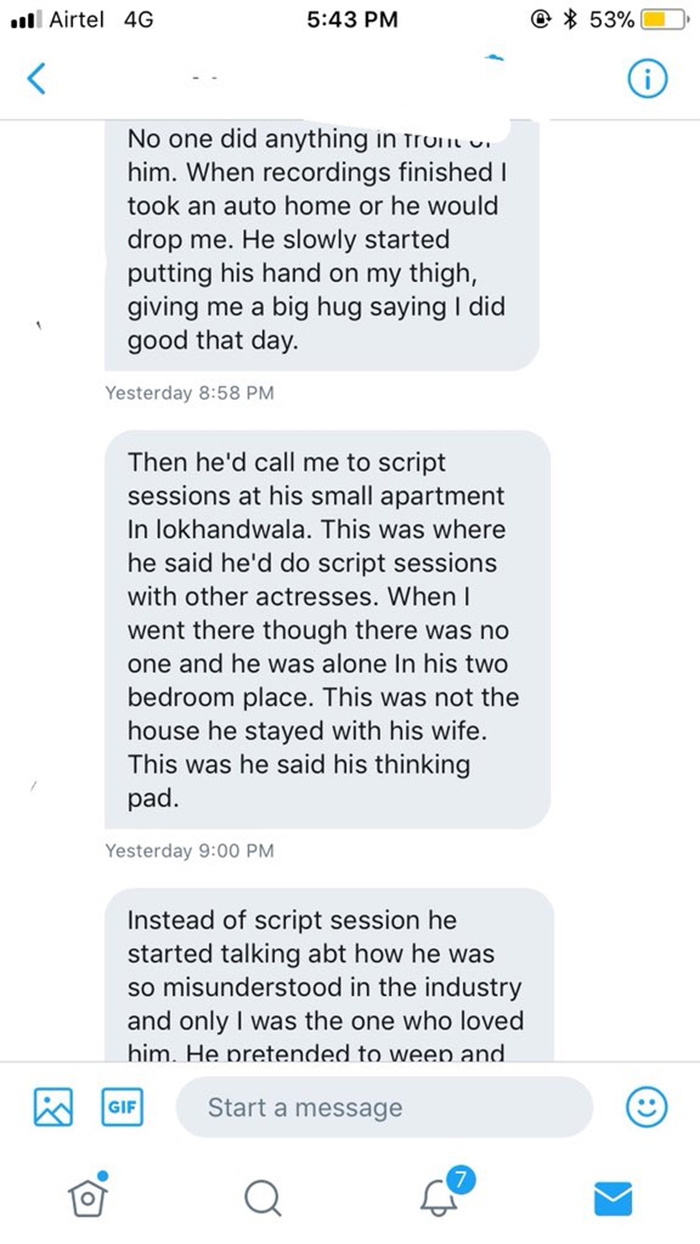 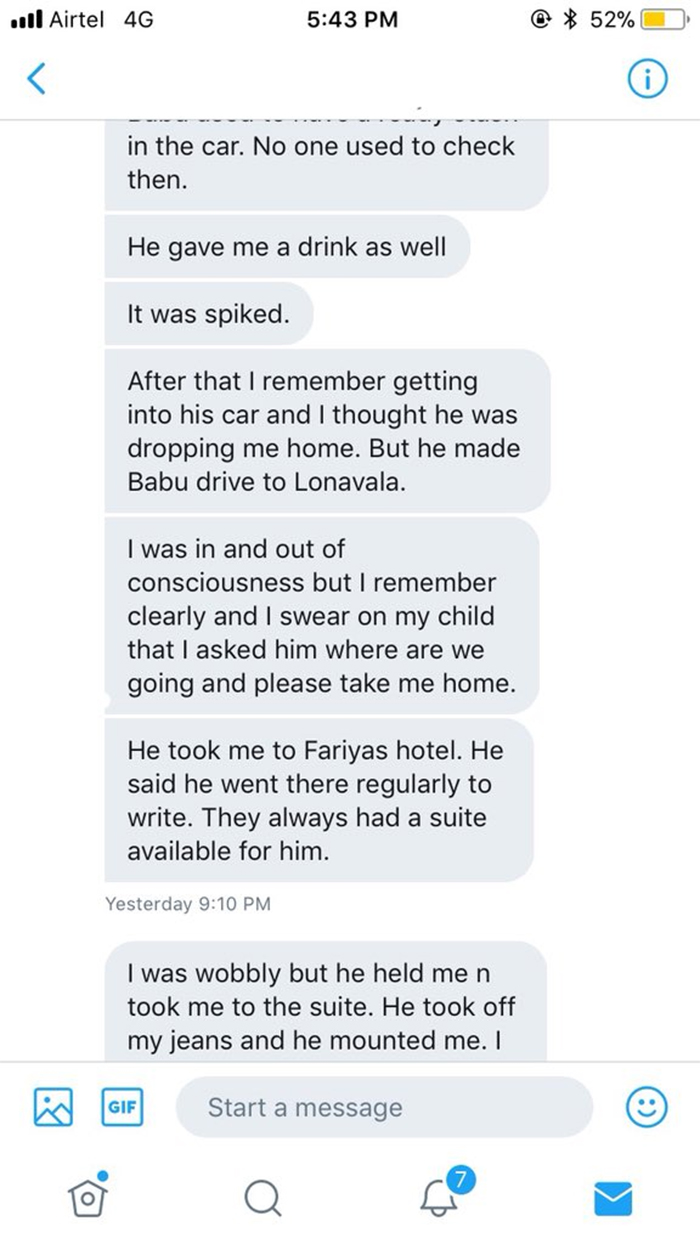 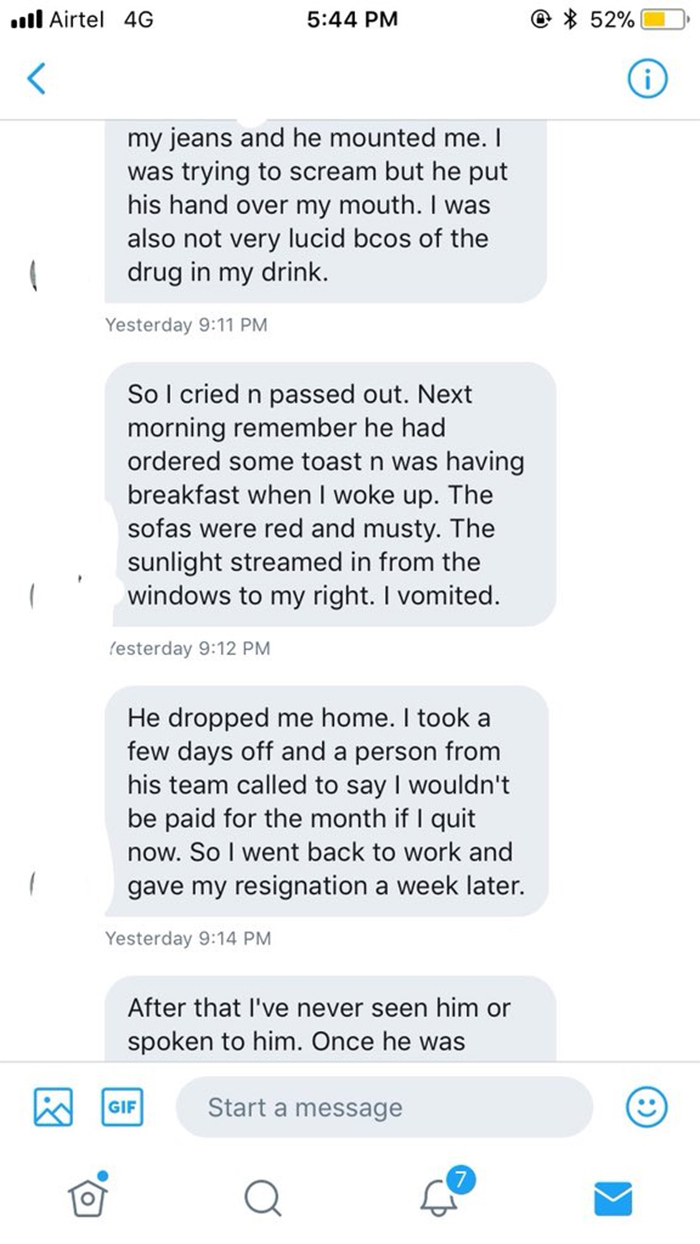 In a statement made to Indian Express, Subhash Ghai has denied the allegations and also indicated the possibility of a defamation lawsuit if need be.

“As I hear some allegation made against me in the air from section of media, I state hereby to the best of my truth.

It’s very sad that it’s becoming a fashion to malign anyone known, bringing some stories from past without any truth or half-truth.

I deny strictly and firmly all false allegation like these.

I have always respected every woman in my life and at work place whatsoever. We live with dignity and respect other’s dignity always.

If she claims this way, she should go to court of law and prove it. Justice will be done. Or I will go for defamation certainly.

God bless them who are trying to harm our long-standing establishment.”

While it is empowering that more and more women are finding the courage to raise their voices after years and years of trauma, the fact that prominent men abusing their power was so rampant, considered normal, and laughed off is a rather sickening thought. Surely, we’re aware of Bollywood’s casting couch and the murky underbelly, but the sheer magnitude of it seems to really sink in when these survivors speak up.