Threatening him with legal action, the minister said, “I have warned earlier about such advertisements. I am personally warning designer Sabyasachi Mukherjee, giving him a 24-hour ultimatum. If this objectionable and obscene advertisement is not withdrawn, then a case will be registered against him and legal action will be taken. The police force will be sent for the action.”

After the minister threatened him, Sabyasachi withdrew the mangalsutra campaign and issued an official statement online, reports The Indian Express.

“In the context of making heritage and culture a dynamic conversation, the Mangalsutra campaign aimed to talk about inclusivity and empowerment. The campaign was intended as a celebration and we are deeply saddened that it has instead offended a section of our society. So, we at Sabyasachi have decided to withdraw the campaign.”

The statement was posted on Instagram stories. Have a look: 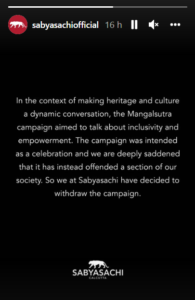 In the past few weeks alone, two other brands withdrew their advertisements after facing backlash and criticism from the public. What are your views on Sabyasachi, too, withdrawing their campaign? Tell us.