Sabyasachi’s ‘Wanderlust’ collection in collaboration with H&M sold out within minutes of its online launch. While thousands of people globally lauded the designer for his work and for making his craft more accessible to the masses, he faced a significant amount of flak for various reasons – from diving into fast fashion to his exorbitant rates.

According to The Indian Express, many from the artisanal sector wrote an open letter to Sabyasachi expressing their concerns about the collaboration. Textile revivalist Laila Tyabji, Jaya Jaitly, founder of artisanal collective Dastkari Haat Samiti, The Crafts Council of India, and Calico Printers Cooperative Society Ltd., Sanganer and others jointly sent out the letter.

They expressed how the H&M X Sabyasachi collaboration was a “missed opportunity” for Indian artisans. They added how only if the collection was entirely made by Indian artisans, instead of being machine-made, India’s design and craftsmanship would have been placed on the global map supporting millions of jobs, equity and “sustainable growth in communities that need it the most.” 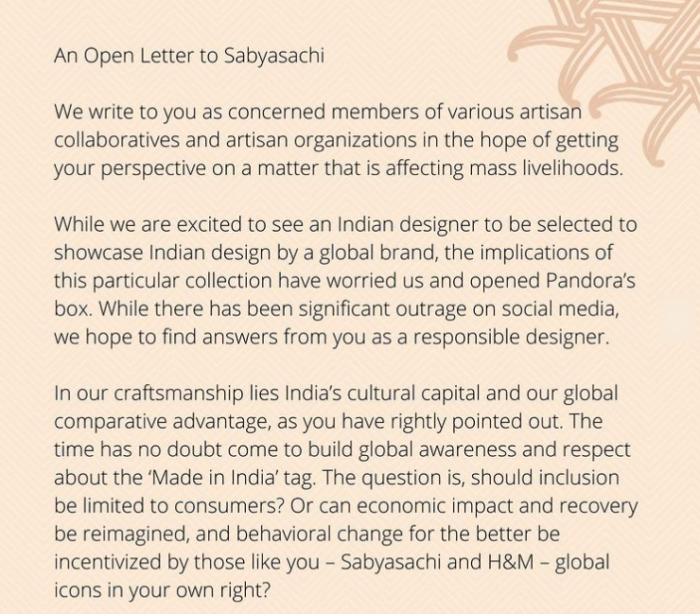 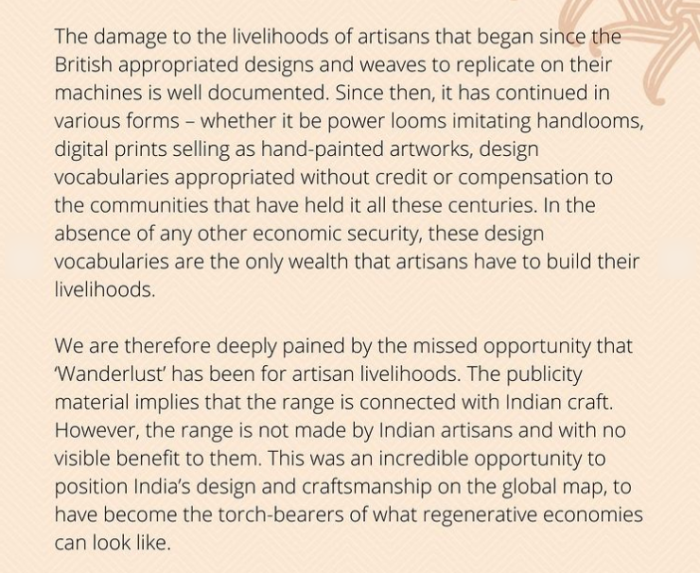 They went on to question whether or not the artisans who are proprietary rights over the designs were compensated, or isn’t he misleading consumers by saying that his collection is “designed” or “made” in India when it wasn’t made by Indian artisans. 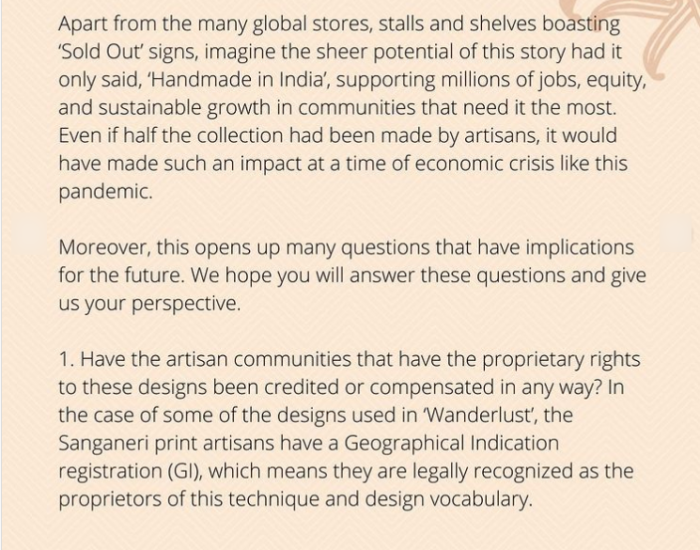 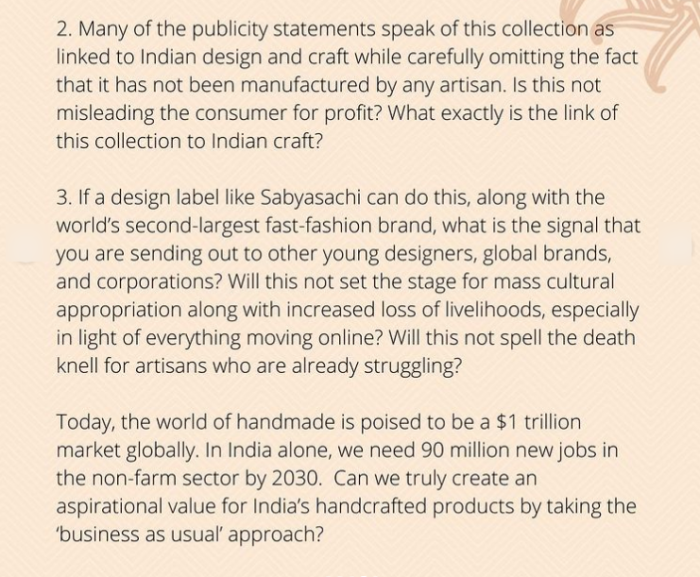 Soon, Sabyasachi responded to the letter by the artisan’s sector. He highlighted how his main field of work, Sabyasachi Couture, has always championed Indian artisans, textiles and crafts. The H&M collaboration, on the other hand, was his attempt to make Indian designs reach more people globally. 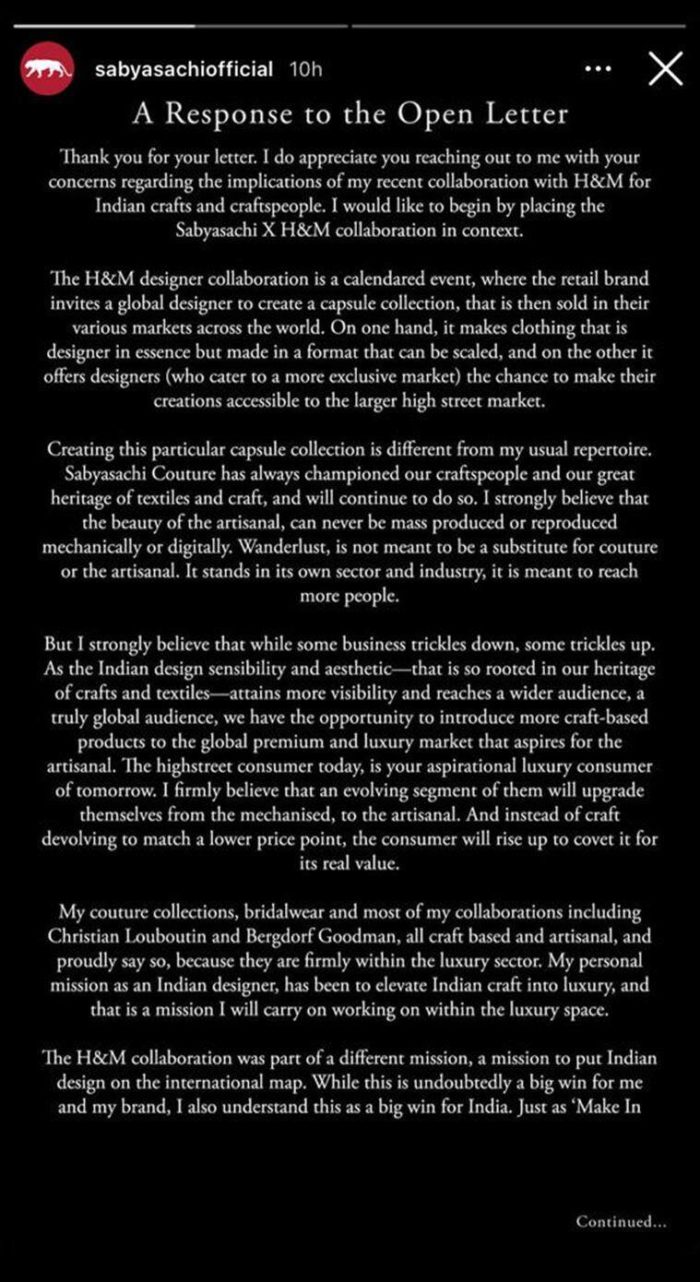 He revealed how the prints used in the collection were hybrids.

“For example, the prints used in this collection are not a replication of Sanganeri handblock prints. It is a hybrid that is inspired by the aesthetic of the Sanganeri block print, the French toile, chintz prints and so on.”

He further claimed that his designs have not been marketed as a Sanganeri print or an artisanal product. 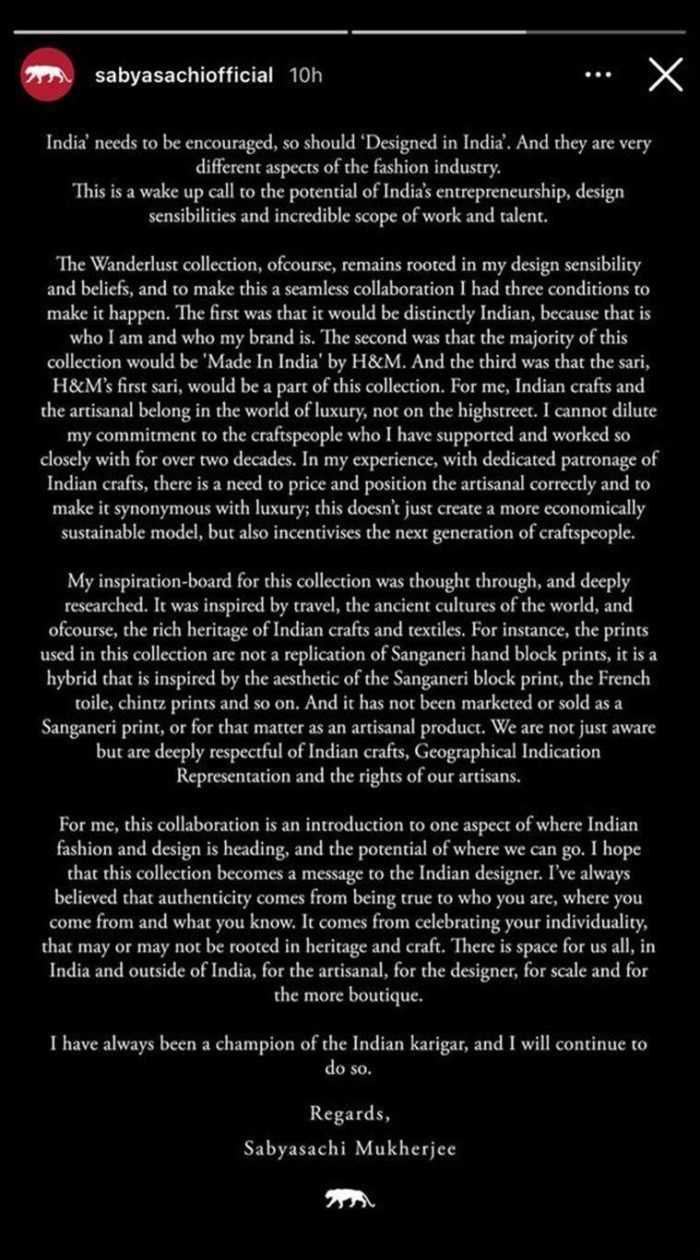 Jaya Jaitly, the founder of artisanal collective Dastkari Haat Samiti, responded to Sabyasachi and called his collection a “disappointment”.

She explained, “It focuses too much on him as a name, as a brand. All of us, the artisans and karigars, think of the community, the art form and the livelihood. What he has done is ‘digitisation’. Even though he is calling it a hybrid design, it’s a hybrid of existing designs. Our karigars are so skilled and innovative, they will create what you want. You don’t have to present a hotch-potch of it. What we teach all the young people, who aspire to work in the craft sector is, ‘to go directly to the craftsperson, understand their skill’. But if you reduce their work to being a ‘hybrid’, and then they have no ownership. You have destroyed their pride and skill.”

What are your views on this incident? Tell us!