The Sabarimala temple in Kerala is one of the largest pilgrimage places in India. The temple is supposed to worship the Hindu God Ayyapan and is sacred to all Indians, south Indians in particular.

The newly appointed chief of the Travancore Devaswom Board President, Prayar Gopalakrishnan, stoked up a controversy in just 2 days of his appointment, by raising the issue of menstruating women being impure and unclean.

The temple has almost never allowed women in the age group of 12 – 50. The legend goes that the deity Ayyapan was a celibate and hence menstruating women are not allowed in the temple.

The devotees of the temple are supposed to follow stringent rules that forbid alcohol, non-veg food, conversing or looking at women, or even coming in contact with women who are menstruating, tobacco, engaging in sex, using foul language, haircut, shaving and even trimming the nails. It is expected of them to bath twice daily, visit local temples regularly and wear only plain blue or black clothes – a sight that is common in many South Indian cities.

“A time will come when people will ask if all women should be disallowed from entering the temple throughout the year. These days there are machines that can scan bodies and check for weapons. There will be a day when a machine is invented to scan if it is the ‘right time’ (not menstruating) for a woman to enter the temple. When that machine is invented, we will talk about letting women inside.”

Prayar’s comment quickly gained friction and a Facebook page that goes by the name of Happy To Bleed came into action. 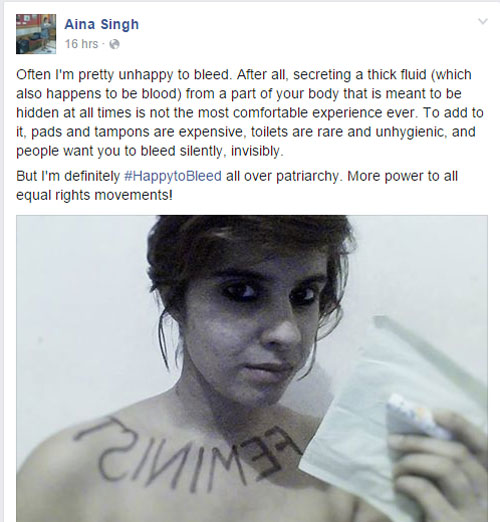 The group states that: ‘Happy To Bleed’ is a counter campaign launched against menstrual taboos, and sexism that women are subject to through it. It acknowledges menstruation as a natural activity which doesn’t need curtains to hide behind. 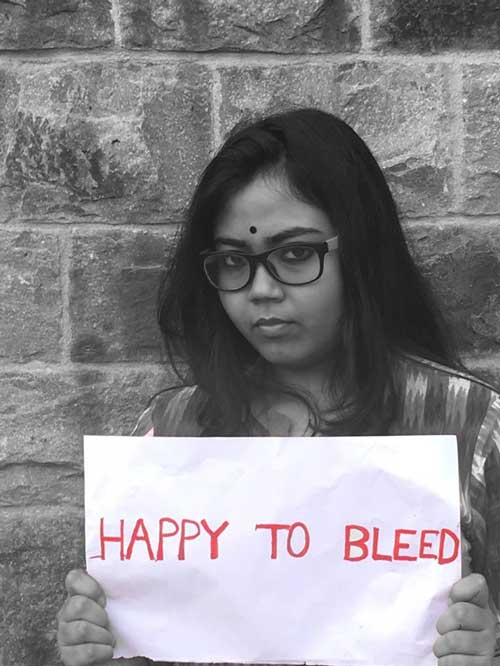 It also urges women to,  ‘hold placards/sanitary napkins/charts saying Happy To Bleed, take their pictures, upload it to their profiles, and send it to us, in order to oppose the shame game played by patriarchal society since ages’.

Women have, in the past revolted in their own small ways, but with the advent of social media, their Facebook page is sure to garner a lot more attention to the attitude of the temple towards a very normal human process.

In 2006, Girija Lokesh, popular Kannada film and TV actress, admitted that she violated Sabarimala regulations by entering the sanctum sanctorum of the temple in 1987.

And in December 2010 the crime branch of Kerala police charge sheeted Kannada actress Jayamala who had claimed that she had entered the temple and touched the idol of Ayyappa.

Lawyer Sudha Ramalingam and poet and activist Ravi Shankar spoke about the issue and said:

“I can’t comprehend this. How can a machine determine the purity of women and what is the standard? How can a machine judge the purity of women? How scientific is it? It seems to be ridiculous. I am against the view that menstruating women are impure. People must first understand what woman and womanhood is and must talk with sensitivity”, said Sudha Ramalingam, a senior lawyer.

Poet and activist Ravi Shankar talked about the number of men who actually ‘cheat’ while adhering to the strict rules mentioned above and said that “There could also be a machine that scans and finds out whether men have led a celibate, teetotaler, vegetarian life for 41 days before entering the temple. This will help reducing the crowd by 90 per cent.”

Prayar Gopalakrishnan said that he wants the security to be tightened in the temple so that no ‘unclean’ woman can enter the temple.