This morning, the country mourned the passing away of popular comedian Raju Srivastava in Delhi who lost the battle to death after fighting it bravely for around 40 days following a cardiac arrest last month.

After Srivastava’s demise, comedian Atul Khatri also penned an emotional post about him saying that his passing away is a big loss for the Indian Stand-up Comedy scene.

But it was under this post that Rohan Joshi AKA MojoRojo (known for being part of the now-defunct comedy company All India Bakchod (AIB)) commented something derogatory about the late comedian that offended scores of people online.

In his now deleted comment, Joshi abused Srivastava saying that we didn’t lose him. He alleged that whether it was Kunal Kamra or any other new comic on the block, Raju Srivastava would take every opportunity to “shit” on them.

“We haven’t lost a thing. Whether it was Kamra whether it was the roast or any comic in the news, Raju Srivastav took every opportunity he ever got to shit on newer comics especially after the new wave of stand up started. He went on every fuckall news channel every time he was invited to go shit on an upcoming art form and call it offensive just because he couldn’t understand it and new stars were rising. He might have told a few good jokes but he understood nothing about the spirit of comedy or defending someone’s right to say something even if you don’t agree. Fuck him and good riddance.” 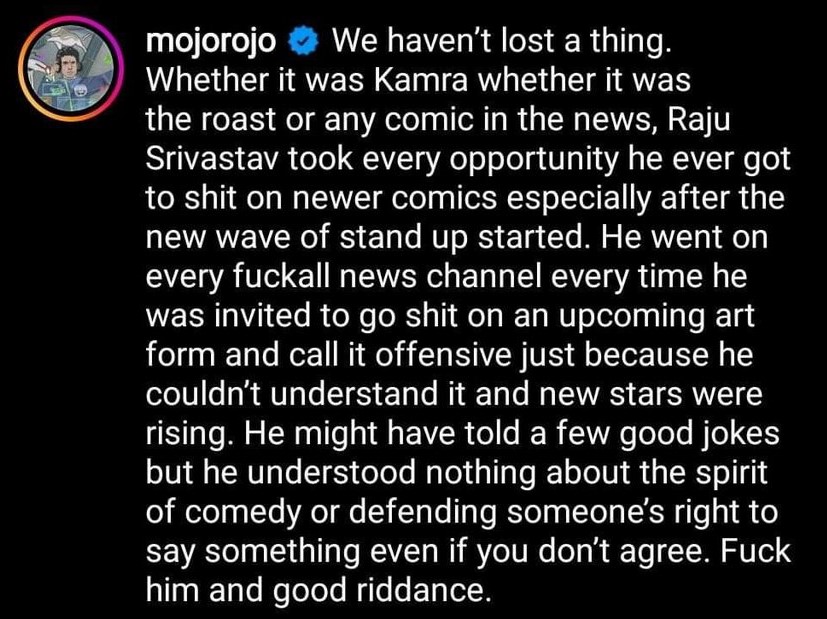 Clearly, Rohan took offense to Raju Srivastava’s jibe at new-age stand-up comics. Having said that, it’s insensitive of him to use such harsh language about someone’s death.

People online resonated with this feeling and slammed Rohan for disrespecting the late comedian.

Fuck him coz he disagreed. Wow. pic.twitter.com/how8SlkCCf

Congratulations Rohan Joshi / Mojorojo. You abused Raju Srivastava under one post’s comment section and you become ‘famous’ across social media.

This is what Srivastava has achieved in his lifetime.

Rohan Joshi had a good 7-8 years to let his displeasure be known to Raju Srivastav himself but chooses to do so in a fellow colleague's comment section who was actually grieving the loss
Tells you 2 things
1. He has no consideration for his fellow colleague's grief
2. He's a cunt

AIB fame Rohan Joshi is abusing Raju Srivastav on his death saying he criticised his comedy, called it offensive.

I've always believed that if you don't have anything nice to say, don't say anything at all, this is a very distasteful comment from Rohan Joshi pic.twitter.com/GxnJJP3CqV

Fact is, everybody mourned when Raju Shrivastav ji passed away. Everyone prayed for him when he was ill.

Not even a mosquito will pray or mourn for Rohan Joshi.

Rohan Joshi of AIB is abusing #RajuSrivastav & celebrating his death

These are people who in the name of comedy even went to the extent of Pedophilia, now abusing a natural comedian who was widely respected

Don't forget the people who supported them and their sexual misconduct pic.twitter.com/q4Pl4Ebo9z

Rohan Joshi is a reminder of why we must be thankful that All India Bakchod is dead. 🤣

He didn’t find Rohan Joshi’s high pitched whining voice funny (nobody beyond the age of 4 finds these things funny) so fuck him!!!! pic.twitter.com/TiKqo4hMmD

Time to unsubscribe @thetanmay 's YouTube channel 🙏🏻
This is really too Disgusting Rohan Joshi shame on u🤮 pic.twitter.com/soUtXkZbrU

The guy doesn't even have basic etiquettes, what a sore loser Rohan Joshi. pic.twitter.com/OEpFc6GXuk

After receiving so much backlash, Rohan not just deleted his comment but also tried to give a clarification saying this was not the time for his ‘personal feelings’.

Good that he realized his comment was in bad taste at this moment.