Recently the AIB Roast was in headlines. Well, technically it still is, but that’s not the point here. The responses that the “Roast” gathered were of mixed opinions. And turns out, most people are born with a sense of humour, and were able to digest the jokes made on the show. 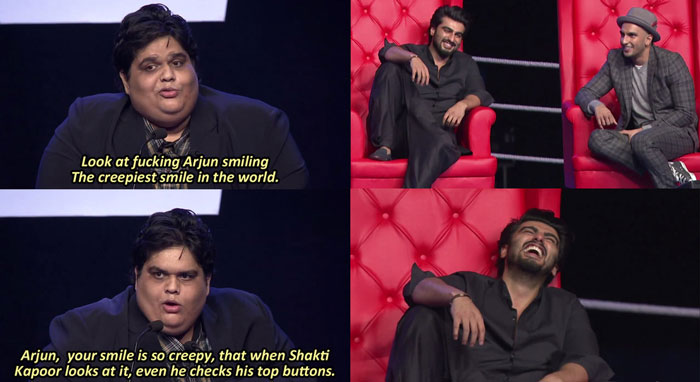 Meanwhile there were some people, who clearly could not take in the “vulgarity” of the jokes.

One among them is Akhilesh Tiwari, President of Brahman Ekta Seva Sanstha in Mumbai, who filed a complain at the Sakinaka police station on Monday against Karan Johar, Ranveer Singh and Arjun Kapoor for passing offensive and abusive comments against each other on a public platform.

This is what Akhilesh Tiwari had to say: “I sought action against the event organizers and other performers as well, who passed dirty comments with such audacity. The police action would be a deterrent to them so that they would not dare to do such acts publicly in future”.

This has lead to the Maharashtra government ordering an inquiry into the show.

“Officials of the Culture Department will examine the (AIB show) videos for the content. If found vulgar, an action will be initiated,” Maharashtra Cultural Affairs Minister Vinod Tawde said.

Here’s what we think:

“A roast is an event in which a specific individual, a guest of honor, is subjected to good-natured jokes at their expense intended to amuse the event’s wider audience.”  It is for people to understand that the jokes made during the show were not subjected at them, so taking offense from it is just pointless.

And here’s what the junta thinks:

Apparently in a Country where riots, female foeticide, people dying of cold and hunger is common, it is AIB Roast which is “Desh ka Kalank”

If they are going to probe AIB roast for abusive language, they will also need to probe every college hostel in this country.

Government will probe AIB Roast. Proof that you cant do better comedy than Government

AIB should do the next AIB Roast in Delhi…There no government, nobody will object…

Peace out people. Go grow yourself a funny bone.