Rhea Chakraborty Posts Tearful Video, Says, “I Believe I Will Get Justice”

One month after Sushant Singh Rajput’s demise, his girlfriend Rhea Chakraborty had penned an emotional note for him and also requested home minister Amit Shah to initiate a CBI probe in his death. However, things took a massive turn when Sushant’s father KK Singh filed an FIR in Bihar against Rhea recently. After the FIR was lodged, Rhea had told the Supreme Court that she has been “falsely implicated”.

Still struggling to face my emotions.. an irreparable numbness in my heart . You are the one who made me believe in love, the power of it . You taught me how a simple mathematical equation can decipher the meaning of life and I promise you that I learnt from you every day. I will never come to terms with you not being here anymore. I know you’re in a much more peaceful place now. The moon, the stars, the galaxies would’ve welcomed “the greatest physicist “with open arms . Full of empathy and joy, you could lighten up a shooting star – now, you are one . I will wait for you my shooting star and make a wish to bring you back to me. You were everything a beautiful person could be, the greatest wonder that the world has seen . My words are incapable of expressing the love we have and I guess you truly meant it when you said it is beyond both of us. You loved everything with an open heart, and now you’ve shown me that our love is indeed exponential. Be in peace Sushi. 30 days of losing you but a lifetime of loving you…. Eternally connected To infinity and beyond

Now, breaking her silence over the FIR filed against her, Rhea said that she will not be commenting on the allegations as the matter is sub judice. reports News18. She was quoted saying,

“I have immense faith in God and the judiciary. I believe that I will get justice. Even though a lot of horrible things have been said about me in the electronic media, I refrain from commenting on them on the advice of my lawyers as the matter is sub judice. Satyamev Jayate. The truth shall prevail.” 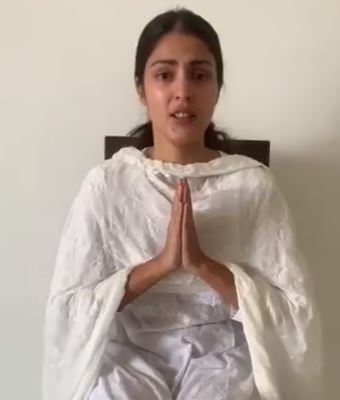 Have a look at the entire video:

Rhea Chkaraborty says she has faith in judiciary and the truth shall prevail. pic.twitter.com/BHazDt7mn5

Sushant’s ex-girlfriend also Ankita Lokhande had also opened up about the late actor saying he was not depressed, as some people have said allegedly. Well, there are two sides to every story and we are sure the truth will come out soon.