Scrolling through the depths of the internet can be a most rewarding experience. We can find people cooking edible food with miniature utensils or find a genius hack to peel hard-boiled eggs.

However, there is also unverified and downright fake content that is so believable that anyone could fall for it. From dubious videos of sun chanting Om to expertly CGI’d snippets of meetings discussing UFOs, we’ve seen all kinds of hoaxes.

According to The Independent, an alleged job listing for a Data Analyst in New York is going viral on Twitter. The reason? It requires interns to cough up $15/hour (approx Rs.1000) to work in the company as it is a “reverse financed internship”.

Here is a closer look at the listing taken from a US-based employment search engine: 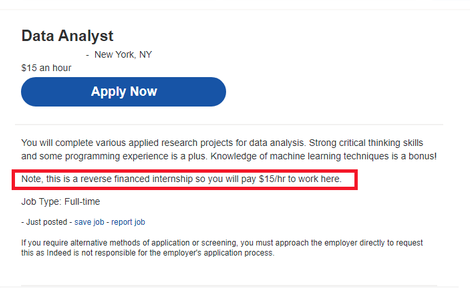 The reactions to the post range from shock and anger to sadness. Because as outrageous as it looks, it is also a little believable in today’s capitalist scenario. Some Twitter users also point out that such a thing is actually illegal in the US.

Do you think they'd accept exposure as payment?

"So tell us, why should we take your money?

This is the final stage of capitalism

Probably fake, but also peak capitalism — so who knows.

This makes me angry, thanks for sharing! pic.twitter.com/aBwFFGHhrb

After a bit of digging, it is evident that even though it has been reposted on multiple Reddit threads, the internship is definitely fake. Eisele & Stern, the company that supposedly came up with it, does not appear in Google searches. Furthermore, the portal has removed the listing and announced that an investigation is underway.

Yeah, the posting itself is real, but the job/company are fake.

— Be excellent to each other. #BlackLivesMatter (@Gebraheel) January 8, 2020

Hi there, we can confirm that this job posting has been removed and we are investigating further internally. <PM

Hi Jonathan, the job posting has been removed and we are investigating further. Thank you. ^DR

So, the next time we’re faced with ‘information’ that seems too good to be true or just doesn’t sit right, we know that a little bit of digging can help us uncover the truth and call out the #FakeNews.