Most Indians are born with this idea that everything that they see, is their property. Or else how would you explain them unzipping their pants and pissing in broad daylight? Or all the half-moons that you get to witness in the early hours of the day through your train window? However, the worst aspect of this mindset has to be our habit of defacing heritage buildings and monuments.

If you’ve been to any famous (or even not-so-famous) historical building, you’re bound to have noticed the most generic name, like Sweety, Raju etc. etched on its walls, in an attempt to immortalise their love. Sure, they could’ve gone down the whole building a Taj Mahal route, but budget bhi toh dekhna padega na? And now this phenomenon has gone so far that Indians are doing it in foreign places as well.

Reddit user baawri_kathputli posted a shining example of how Indians in Canada have defaced a famous monument to profess their love or just use it as their personal scrapbook.

The victim was the CN Tower in Canada, which is a 553.3m high concrete communications and observation tower. Here’s how it looks from the outside.

Majestic, modern, beautiful, isn’t it? And here’s how it looks from the inside.

Netizens who saw this were infurious and shamed those anonymous people who had done this.

3. At least dogs don’t know what’s historic and what’s not.

4. Nothing is complete without that.

That said some netizens tried to defend these markings and called it a part of the aesthetics of the place.

But the best observation came from one Reddit user who saw the instant connection between the inscriptions and ‘3 Idiots’. 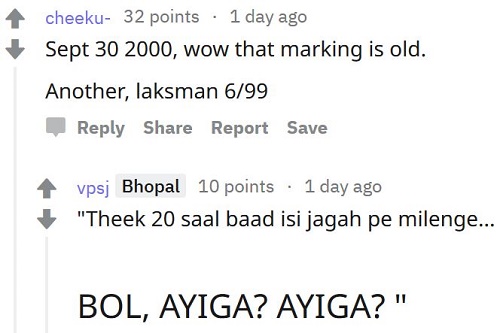 So, what are your thoughts on this? Is it okay to etch your names on historical monuments because  in a few years everything will turn to dust? Or people should be strictly prohibited from doing so, even if that means barring us from entering these places?