Old Trafford, Manchester was painted blue on Sunday as a brilliant Indian side defeated their arch-rivals Pakistan comprehensively at the ICC Cricket World Cup 2019. However, while Virat Kohli and co. were putting up an electrifying show on the 22 yards, there was another entertainer who was cheering for his team from the stands.

Yes, we are talking about Ranveer Singh, the ultimate showstopper of Bollywood. Being a massive sports enthusiast, the energetic actor did not miss the opportunity to boost up his countrymen and left only after making his presence felt.

Ranveer, who is currently in London to shoot for his film ’83, was seen taking the field at the end of the match. The man went up to Virat Kohli, had a few words and gave him a big hug as congratulations. Now, that was a moment to be framed.

#ranveersingh and #ViratKohli after The Match hugging each other😍💪👏

Not only the players but he also managed to fire up the crowd.

If that wasn’t enough, the 33-year-old took his charm to the commentary box next, when he was seen dancing with the legendary Sunil Gavaskar. While Ranveer was at his best shaking his leg to ‘Badan Pe Sitare’, you got to give it up for Sunny for putting up a delightful show. 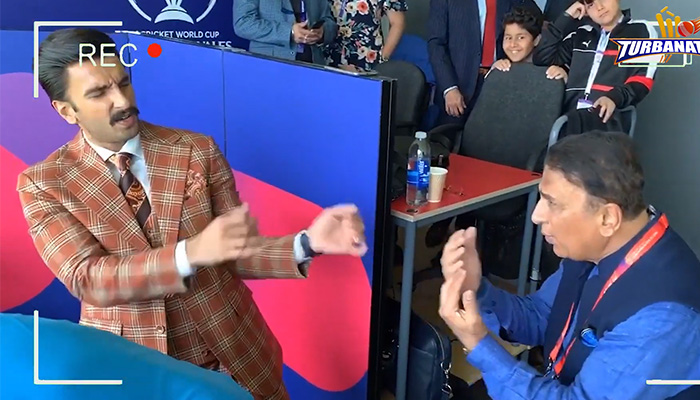 What an absolute charmer this man is. We wish him all the best for his next release!