We’re no stranger to Ranu Mondal, the woman who became a viral sensation after she was filmed at the Ranaghat station in West Bengal singing the icon Lata Mangeshkar’s popular 1972 track ‘Ek Pyar Ka Nagma’ Hai from Shor in her soulful voice. 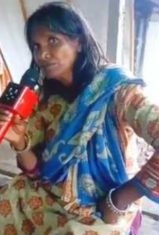 Soon after Mondal’s video spread like wildfire on social media in July 2019, another surprise knocked at her door and she was given a scintillating makeover.

From being a nobody to a viral star, Mondal became the talk of the town and was later recognised by the who’s who of the television world and was even offered TV shows. Now popular Bollywood singer-composer Himesh Reshammiya has decided to polish this raw diamond and grace the world with her voice. Himesh had earlier offered Mondal the opportunity to sing in his upcoming movie “Happy Hardy and Heer”. This was at a time when she was invited on the sets of the reality show, ‘Superstar Singer’.

Recorded teri meri kahani my new song from happy hardy and heer with the very talented ranu mondal who has a divine voice , all your our dreams can come true if we have the courage to peruse them , a positive attitude can really make dreams come true , thanks for all your love and support

Himesh feels that Mondal is blessed with divinity.

“Today, I met Ranuji and I feel that she is blessed with divinity. Her singing was mesmerising and I could not stop myself from offering her the best I could. She has a god’s gift which needs to be shared with the world and by singing in my upcoming movie, ‘Happy Hardy and Heer’, I think I will help her voice reach everyone.”

He said that it was Salman Khan’s father’s advice because of which he offered the talented Mondal with the best he could. “Salman bhai’s father Salim uncle once advised me that whenever in life I come across a talented person, I should never let that person go and keep him/her close to me. He advised me to help that person grow his/her talent.”

They say if you have talent, nothing can pull you down. Mondal’s amazing saga proves that everything will happen in its own time, all we need is patience and the determination to never give up on our passion.