The major discourse surrounding mental health has boomed in the past 2 years, ever since the onset of the pandemic. The kind of awareness around anxiety, depression and other mental health issues that we have today was negligible in comparison a decade ago. But people have been suffering from such issues for generations.

So imagine how personally attacked they felt when someone else poked fun at their condition. I say this because a video from 7 years ago has popped up, where Ranbir Kapoor is seen insensitively making fun of Anushka Sharma’s anxiety. This was probably during the time they were promoting ‘Bombay Velvet’. 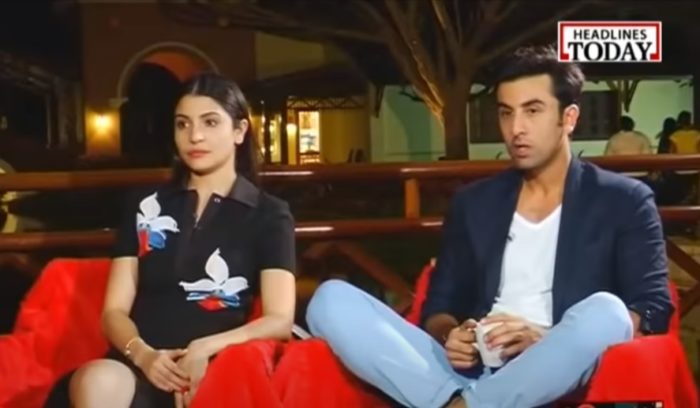 In an interview with India Today, Ranbir says, “She is the anxiety queen,” adding that Anushka has to pop pills even to have a conversation.

“She has a medical problem and a dental problem but we accept her. She is special,” he says.

Even if we were to argue that this was 7 years back when there was little to no sensitisation of mental health issues or the awareness of how to address it in public, to reveal the kind of medication a person is under, which is deeply personal information, and to poke fun at their “medical problem”, as he rightly says, on national television, is without a doubt deplorable.

And he is being called out for this. Have a look:

this was so difficult to watch. he's such an insensitive human being. who talks about anxiety meds like this? she's clearly so uncomfortable and rightfully so. horrible. https://t.co/XP8IEprAKf

so insensitive.
both ranbir and ranveer have been awful to anushka on different occasions but she has to maintain cordial relationship with them coz they're her colleagues.
must be so tough for girls to survive in bw.. also love how she didn't hold back and put him in his place. https://t.co/6ukfOXK6rX

Why you ever do that to anyone, let alone your costar? And then further trying to pull her down in the most ableist way, eww https://t.co/Frfu4zJTZZ

"don't say that anushka, you can't say that on tv" after he joked about her medical condition and what not just 2 sentences ago this man is absolutely horrible https://t.co/VeU6BeEx3e

I knew this guy was an annoying narcissist but i never thought he would be so insensitive – at least she knows what medication can help her.Outing her public is not a cool thing.
But what about Mr. know it all? When is he going to actually seek help and become a better person?? https://t.co/KsKnJsIapF

Making fun of someone's medical condition ain't funny and it doesn't make u cool either https://t.co/c6nxxcRdwt

he’s such a dog… no wonder ppl don’t wanna talk about their mental health when others make such crass jokes on their expense… it’s ok if you don’t have anxiety disorder and you don’t need meds but you could at least have empathy for those who are struggling https://t.co/bUk5ziSCf1

What medication you are on is personal. You share it with a colleague in order to manage expectations on days that are bad. Not for him to drop it as a "quirky" detail in a very public interview. She is right to get back at him. I'd be so mad if someone I trusted did this with me https://t.co/aXO2yi5yxD

triggering. as someone who lives with anxiety, this is very disturbing. it's because assholes like him, people don't trust anyone to talk about their mental health issues and seek help. they fear getting invalidated for their mental suffering!

This is the problem with this stupid country, a whole generation is talking abt him & his stupid movie and some nursery level lyrics, knowing that he's an insensitive grown druggist, mocking her mental conditions.

As someone who takes tablets for mental health, this is my worst nightmare.

Had someone put me in such situation where they talk about my mental health medicine intake in public forum, I'm never looking at them again! Like this is the second worst thing one could do to me. https://t.co/LJEZRpGHwz

Unbelievable that two young, cosmopolitan Indians with full exposure to issues of #Mentalhealth would choose to speak like this about anxiety, with one's medication being publicly discussed and laughed at, including by the anchor. I was horrified to come across this in my feed. https://t.co/rlJ38E2CjX

I don’t know if after this interview Ranbir Kapoor apologized to Anushka Sharma or not, but he should. And not just to her, but to the innumerable people suffering from mental health conditions who felt terrible about themselves after watching his interview.