While 2020 has been a tough year for many of us, teachers globally have risen to the occasion to ensure students don’t miss out on their education. From innovatively using virtual reality to taking advantage of modern technology, professors are going out of their way to help kids with their studies. And, they are doing so despite facing a lot of obstacles like online bullying.

Recently, a twitter user shared a rather detailed email he received from his professor about the postponement of their examination. Explaining why he has to postpone the test, the professor named Patrick Willson wrote that he was shot and was being treated in the ER. That’s not all. He then goes on to reveal he has COVID and is going through a messy divorce too. We certainly feel bad for the poor professor.

The professor distressingly ends his mail with “If I am alive, the exam will be moved to Monday of next week.” Well, it’s no secret that teachers globally are working tirelessly to adjust to the new normal and they deserve a break too.

Just received this rollercoaster of an email from one of my professors pic.twitter.com/6vGfiRNFI9

As the tweet went viral, the professor updated people saying things were okay. He then wittingly warned his students, “Unlike my wife, I expect you not to cheat.” Well, now that’s savage! 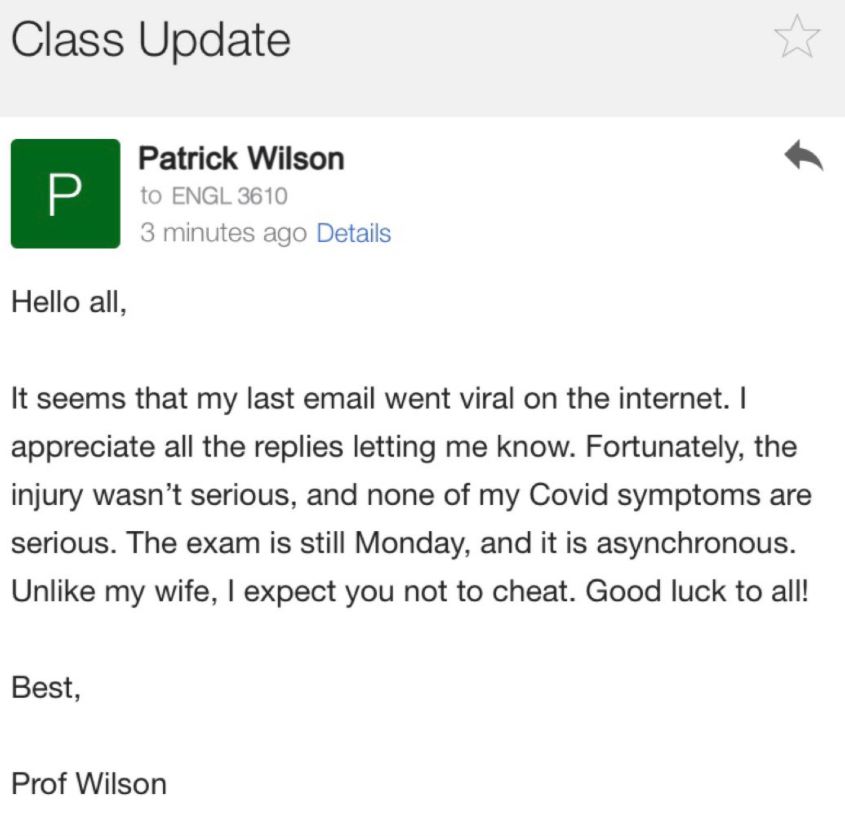 Many people were shocked to hear about the professor’s current situation:

his spouse exposed him to covid19 through infidelity, he filed for divorce but went to confront the adulterer face to face and got shot

I remember walking up to physics class on a Friday to see a handwritten note: “Class canceled due to lack of interest”
and was impressed
But this is on a whole new level. Respect.

Is Professor Wilson British? Because I am getting some BIG British energy from, “Against my best wishes, I have been shot.”

Who the FUCK shot Professor Wilson AGAINST HIS BEST WISHES???

Me invested in the story: pic.twitter.com/HLUF8BT9aV

But wait, did his wife shoot him? Or was it the homewrecker?

this is one of the very few times I have actually felt bad for a professor. Usually they are the ones who are not understanding of the personal/health problems students have. But BRO poor professor Wilson 🙁

A few people pointed out that maybe the professor was being sarcastic since a lot of students often use such excuses to get out of online classes:

I once received an email from a student that read:
“Hey Teach,
I can’t be in class because I broke my neck. See ya in two weeks.”
This email reminded me of that one. Hope the guy gets better and keeps his laptop in the divorce.

Well, despite everything else, the professor seems like a hilarious person. We wish him a speedy recovery. What do you think about this bizarre incident? Tell us!