Brace yourself, there’s going to be yet another analysis of the NickYanka wedding coming up! You’d think people would be done discussing Priyanka Chopra and Nick Jonas’ wedding. But as more pictures are released, the detective fans are glossing over the pictures with what seems to be a magnifying glass! And of course, like some Avengers’ movie, there are fan theories about them too! Like this one about PeeCee’s mehendi!

One of the most special things that our relationship has given us is a merging of families who love and respect each other's faiths and cultures. And so planning our wedding with an amalgamation of both was so so amazing. An important part of the pre wedding rituals for the girl in an Indian wedding is the Mehendi. Once again we made it our own and it was an afternoon that kicked off the celebrations in the way we both dreamed. @nickjonas

If you look carefully at the Christian and Hindu wedding photos, you can see mehendi on her hand during the latter, but no in the former.

This seems to have baffled a lot of fans, considering the mehendi ceremony happened before the Christian wedding, and Hindu ceremony after it. So where did that mehendi go, bruh? 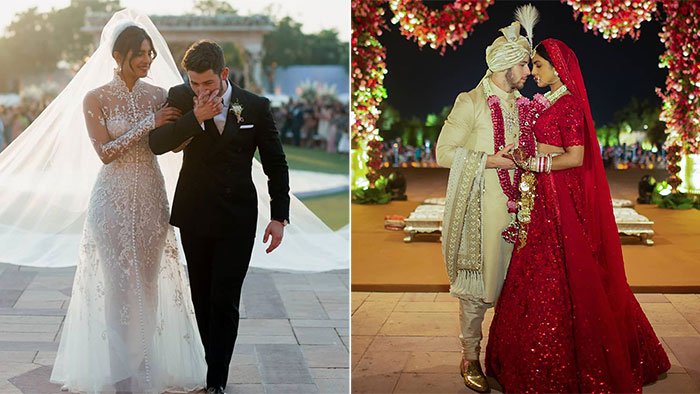 You can’t even see it in the sangeet photos, which happened the same evening as the mehendi ceremony!

It all began as a fierce song & dance competition between the families but ended, as always, as a huge celebration of love.  Nick and I were looking forward to the Sangeet (musical evening), another pre wedding ritual.. and to see what each side had put together. And what a performance it was. Each family telling our stories through song and dance, filled with lots of laughter and love. We were both filled with gratitude for the effort, the love and the laughter and will carry the memories of this special evening for the rest of our lives. It is an amazing start to a lifetime of togetherness for our families and friends…#grateful @nickjonas 📹/📷: @calebjordanlee @josevilla @josephradhik

Well, there’s a theory doing the rounds and it kinda makes sense. Here’s a smart trick that PeeCee could’ve used.

During her mehendi, Priyanka could’ve just applied mehendi on the front of her hand, which is why we don’t see any of it during the Christian wedding. 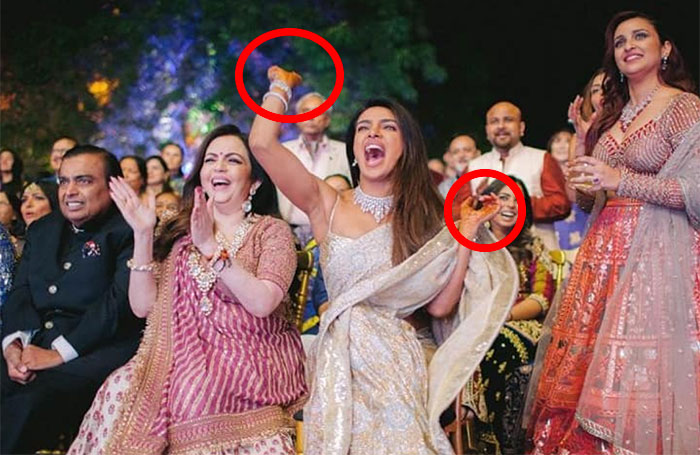 And then right before the Hindu ceremony, she would’ve gotten it on the back of her hands too!

So, I guess, mystery solved!

In related news and for those of you who’d love to know this, PeeCee has changed her name on Instagram to Priyanka Chopra Jonas!

Awww, that bio though!

Waiting eagerly for some more pictures from their second reception!