Chhattisgarh Priests Walk On Childless Women’s Backs So They Can Conceive A Baby, Watch

Time and again, we come across bizarre rituals that are either funny or concerning. However, while harmless beliefs might not hurt anyone, there are certain superstitions that put an individual’s safety at risk.

For instance, in an odd ritual in Chhattisgarh’s Dhamtari district, a group of priests walked on the backs of over 200 married women in an annual traditional fair. Wondering why? TOI reports that women who nurture a desire to be a mother, let priests walk on their backs believing the blessings would help them conceive a child. 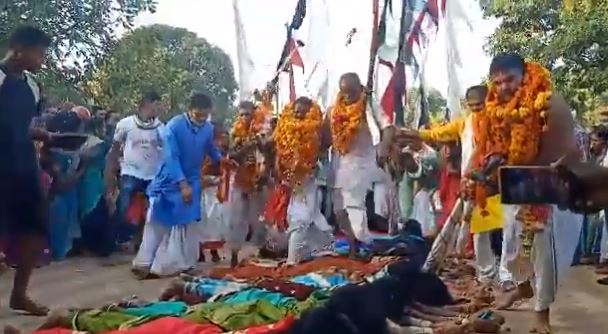 The annual event called ‘Madhai Mela’ (Madhai Fair) was held after Diwali and was attended by thousands of devotees. Many tribals offered their reverence to Goddess Angaarmoti. Keen villagers even watched the ritual as priests chanted mantras and held flags while walking on the women.

Over 200 married women yearning to conceive lay on the ground and a group of priests walked on their backs beseeching the blessings from a local Goddess during ‘Madhai Mela’ in Chhattisgarh’s Dhamtari district. pic.twitter.com/dmO9iKkLHZ

“The Madhai Mela is believed to be taking place for the past 500 years. We are now carrying forward the tradition. People attend the ritual with a firm belief, which shouldn’t be misinterpreted. It’s miraculous to find several married women now blessed with children after they attended the fair in the past.”

Chhattisgarh: In a bizarre ritual, hundreds of married women longing for conception lay down on the ground on Friday to allow priests and witchdoctors to walk on their backs to enter a temple in Dhamtari, believing this will bless them with a child.pic.twitter.com/PhkHYWwMCp

Kiranmayee Nayak, chairperson of Chhattisgarh state commission for women spoke about the event saying she doesn’t endorse it. She said,

“It’s very hazardous as men were seen walking on the women. It could injure their vital organs. I will visit the place with my team and initiate an awareness campaign with the help of locals to discourage the practice and make women aware of the best ways of easy conception and seeking blessing from the Goddess. We will ensure that their religious sentiments aren’t hurt.”

Many people online raised concerns over the practice.

Beyond any logic and words!

Absolutely ridiculous. Shame on those men walking over those innocent women.

These kinda practices should End 👿

During the event, many people reportedly flouted Covid-19 norms as well. Individuals were seen roaming around without masks in the fair. What do you think of this odd ceremony? Tell us.