There have been several instances where people with lesser opportunities and resources have achieved success, inspiring many to never give up despite trying times.

Same is the case with one boy from Cambodia named Pich Theara who recently participated in a cycling event. He didn’t have an expensive cycle, proper protective gear, clothes, and shoes like the rest of the cyclists, who rode shiny mountain bikes. What he had was determination, and he used it to complete his task. So he paddled on barefooted, sitting on his worn-down cycle.

Pictures of the boy soon flooded social media and people from the cycling community took notice. Touched by the boy’s spirit, many showered him with love and support online. One man named Lang Tyleang, who came across pictures of the boy on Facebook, tracked him down and gifted him a brand new cycle!

“Now I find that boy and give him a bike for his hard work and good attitude,” Lang wrote.

Now I find that boy and give him a bike for his hard work and good attitude.

However, Lang wasn’t the only person to gift the boy something. Several people came forward and helped the boy by gifting him new shoes, clothes, and books, reports Cambodia News English. Some also gifted him money.

People online thanked Lang Tyleang and everyone else who showered their support on the boy. Here’s what they said: 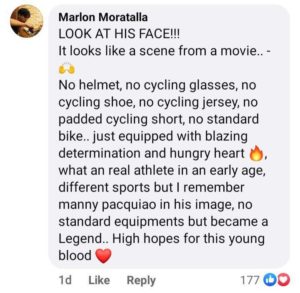 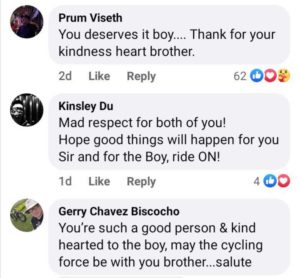 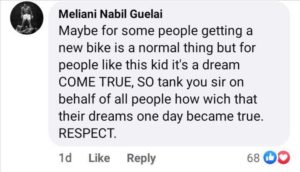 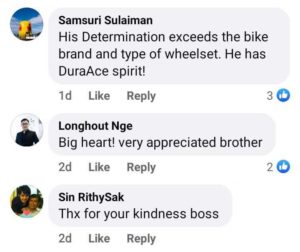 These are the kind of incidents that restores our faith in humanity!