Diwali this year was LIT at Chopra-Jonas’s house. Desi girl Priyanka Chopra gave an Indian touch to the festivities by decorating her new house desi-style. While she attended a couple of Diwali parties in a foreign land, she also hosted a star-studded one.

Taking to social media, she gave us a sneak peek of her Diwali looks and her well-decorated new house.

The couple was also seen seeking the blessings of Goddess Mahalakshmi and conducting puja and arti on Diwali, just like we do in Indian households.

And among the many pictures she shared romancing with hubby Nick Jonas, one caught the attention of desis online. We couldn’t help but notice the gathbandhan from their Hindu wedding framed and hanged on one of the walls of their home. 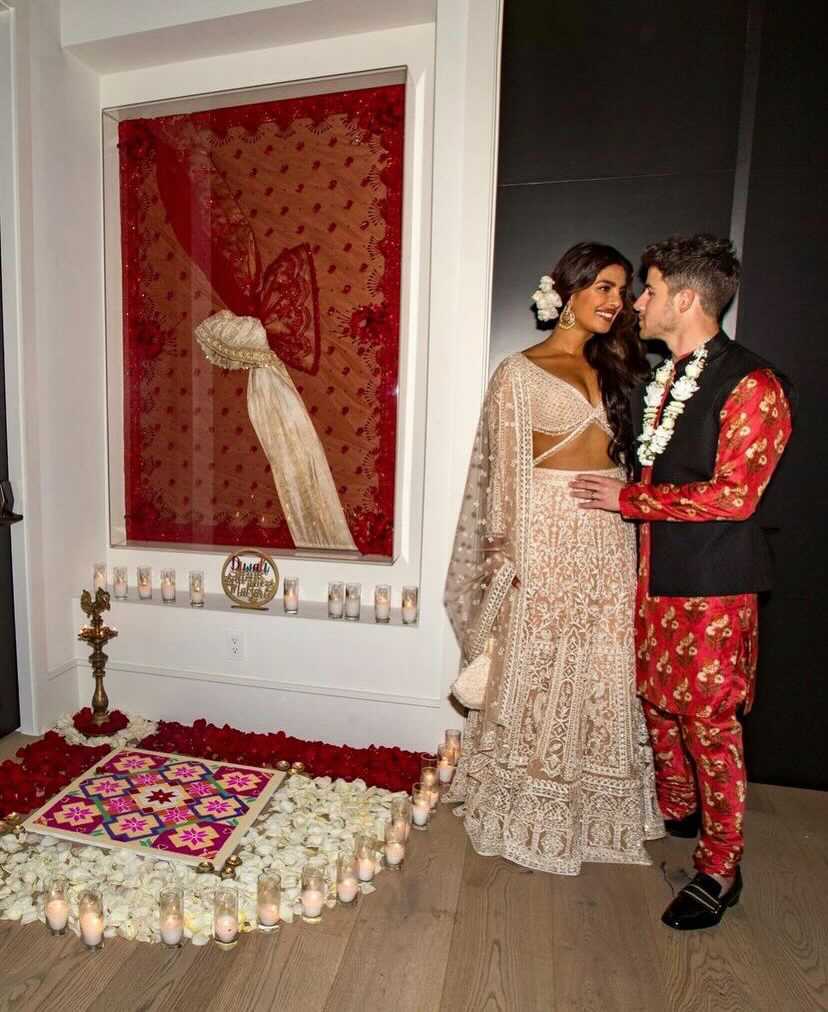 Seeing the international star stick to her roots and take Indian traditions with her across the border, the internet was delighted.

Bollywood actress Priyanka Chopra has started living in the US with her husband after getting married. However, she has not forgotten her culture. She celebrates festivals in a grandly. She also celebrated Diwali grandly with her husband.#sanopaper @priyankachopra @nickjonas pic.twitter.com/t7S8IyYmeb

Priyanka Chopra has been normalizing Indian traditions in the west for so many years now and has been embracing her culture and who she is since she started her career in the US. She deserves some props and love for never abandoning who she is and being a great leader !

Seeing Nick in Indian clothes and partaking in Indian traditions with PC just warms my heart cuz he's so respectful and caring about our culture. We love a supportive spouse, esp. for my queen since she's such a supportive wife. blessings alway babes @nickjonas @priyankachopra https://t.co/wWevP8l48c

IT'S LITERALLY MIDNIGHT RIGHT NOW AND I'M SCREAMING AND CRYING AFTER I SAW THIS OMGGGGG MY PARENTS ❤️🥺🥺
.
.#PriyankaChopra#PriyankaChopraJonas#NickJonas#Diwali pic.twitter.com/c5gE6sLaij

Just love how @priyankachopra always embraces her culture/roots and celebrates our festivals with such joy/divinity, capturing the true essence of #Diwali  she wins my heart each time 🥺❤️❤️ https://t.co/vFZoTEtEsw

Their relation is beautiful relationship of equals and also the way nick embraces her culture and she equally does makes me go emo🥺❤️#PriyankaChopra pic.twitter.com/JH8RB17f3S

People online also commented that framing a couple’s wedding gathbandhan can now become a trend, thanks to PeeCee.

Absolutely love and adore the idea of this frame. @priyankachopra getting her gathbandhan with @nickjonas framed is innovative and classy!

Ps: waiting for entire gathbandhan weddings in India to follow this trend.. 🙂 pic.twitter.com/YAivB9kUBq

They way I cried after I saw this that they have framed their gathbandhan dupatta literally the most cutest thing I ever seen I'm still crying ❤️🥺🥺
.
.#PriyankaChopra#PriyankaChopraJonas#NickJonas#Diwali pic.twitter.com/mInHb8Bsc9

They have framed their gathbandhan dupatta that's cute. ❤ pic.twitter.com/5kEb4xSUZT

In 2019, the newlyweds celebrated their first Diwali in Cabo, Mexico by worshipping the idols of Goddess Lakshmi and Lord Ganesha.

As it’s rightly said, you can take an Indian out of India but you can’t get India out of an Indian. You go, girl!