Back in 2018, the ‘Me Too‘ movement had taken the Bollywood industry by rage as several known faces were accused of sexual misconduct by people in B-town. Now, Paula, an Indian model, has come out and accused filmmaker Sajid Khan of harassing her when she was 17, reports Mumbai Mirror.

Paula penned a note alleging that the director had harassed her under the pretense of offering her a role in his film ‘Housefull’. She wrote, “When #MeToo movement started, a lot of people spoke about Sajid Khan but I did not dare to because like every other actor who has no godfather and had to earn for a family I kept quiet. Now I don’t have my parents with me. I’m earning for myself. I can dare to tell that I have been harassed by Sajid Khan at the age of 17 (sic).”

🙏🏼 Before democracy dies and there is no freedom of speech anymore I thought I should speak !

Sharing her ordeal she added,

“He spoke dirty to me. He tried to touch me. He even told me to strip in front of him just to get a role in his upcoming Housefull movie (sic).”

Paula said that she should have spoken about the incident earlier. She revealed that it had affected her so badly as a child that she chose not to speak about it, reports DNA. She further added that people like him should be behind bars for “not only casting couch but manipulating and stealing away your dreams”.

Defending her decision to speak out now, she said that she revaluated her life during the pandemic and decided to end this chapter. 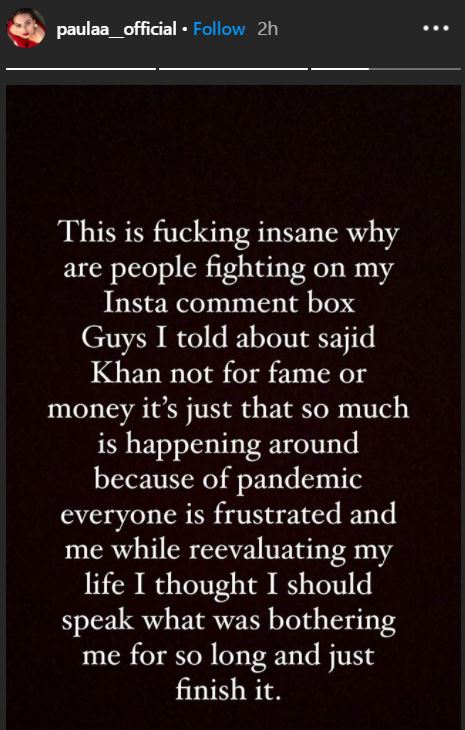 For the uninitiated, in 2018, several female actresses including a journalist and assistant director had accused the filmmaker of sexual harassment. What do you think about the entire incident? Tell us in the comments below.