If You Think The BBC Documentary On Nirbhaya Should Be Banned, This Article Is For You

On the fateful night of December 16, 2012, a young woman in New Delhi was brutally gang-raped, and its repercussions took her life away. Nirbhaya (meaning ‘fearless’, a name given to the victim who went by the name Jyoti Singh) has been in our minds ever since that incident, and the face of women’s rights changed drastically after.

2 years later, a British documentary maker, Leslee Udwin came out with a documentary about this incident, and it has taken the country by storm. Here’s what happened.

1. For those who know vaguely about the issue – a BBC documentary, ‘India’s Daughter’, has been banned in India

The reason for this, as said by authorities, was that the content the documentary entailed ‘tarnished the image of the deceased‘, as one of the rapists who has been filmed has justified his actions of rape, which, needless to say, were derogatory, offensive, and showed no remorse whatsoever.

2. However, the victim’s parents have a different take on this. Badrinath Singh (the victim’s father) is of the opinion that the film should not be banned, because the harsh truth of the state of women in our country should be brought to light 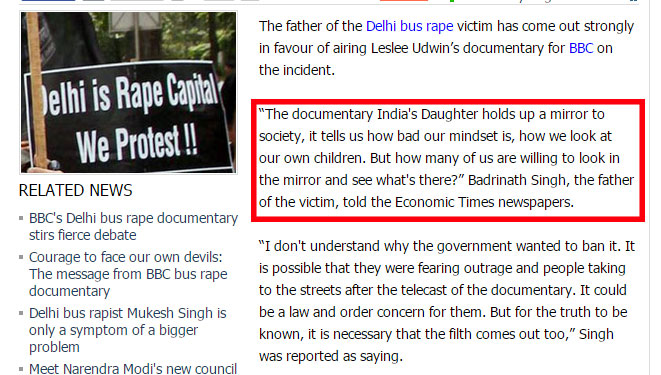 3. Leslee Udwin, the maker of the documentary, has reportedly flown out of India, fearing that she might get arrested or charged for the film

The filmmaker’s emotional plea to broadcast this film was made to the Prime Minister, Mr. Narendra Modi, but it bore no fruit.

4. Despite being pressed not to air it, BBC went ahead and aired the documentary in the UK, giving a rather powerful reason for their decision

The film was originally supposed to air on March 8 on account of International Women’s Day, but the sudden massive uproar in India compelled them to air it on March 4 instead. They said that it was important for people to watch this ‘at the earliest opportunity’ (the video is available online, but not for long).

5. Even before BBC’s courageous stride to air the documentary, several Indian authorities who were against it voiced their opinion

This statement is not only appalling, but also ridiculous, because the point of this documentary was to illuminate the darker sides of what really happened on the night of 16th December, 2012, why, and how.

Here’s why the documentary shouldn’t have been banned:

Numerous people are of the opinion that the documentary should not be banned for the above mentioned reasons. While there are so many of us who are educated and even well off, it’s shocking how a lot of us are still so incredibly  narrow minded when it comes to knowing what a woman’s place is in our society.

In conclusion, we’d like to say that banning this documentary has done nothing but make us run away from the crude reflection of who we are as Indians – a nation where Goddesses are worshipped just as staunchly as a woman is treated like she’s a nobody.