The country recently got its fifth female Indian boxer to win a gold at the (52 kg) Women’s World Boxing Championship. Nikhat Zareen is the 25-year-old champion who took down Thailand’s Jitpong Jutamas to become the World Champion in Turkey, reported The Indian Express.

At 14, one of the four daughters of former footballer and cricketer Mohammad Jameel was crowned the World Youth Boxing Champion. And despite a shoulder injury that forced her to miss a chance back in 2017, the fighter fought again after five years to claim the title of world champion.

“To win a gold in the world championships is something which will act as an inspiration to Muslim girls as well each girl in the country to aim to achieve bigger in life. A kid, where he is boy or girl, has to make their own way and Nikhat has paved her own way,” her proud dad was quoted as saying.

ONE FOR THE HISTORY BOOKS ✍️ 🤩

This is how her family would welcome their champ. “For the last 2-3 years, she has missed her favorite biryani and nihari. Once she gets free from the camp, she can have a full for 1-2 days only before she again gets busy,” Jameel added.

Jameel always encouraged his daughter even if it meant entering a sport that was dominated by men, especially in Nizamabad or even Hyderabad in the late 2000s. And since female boxers were required to wear training shorts and shirts, it made things even more difficult for them.

Born in Nizamabad in Telangana, the boxer got emotional after her amazing feat. NDTV quote her saying, “It is a very big moment for me that I have managed to win the gold for the country at the Women’s Championships.”

“I am feeling very happy, hopefully, I continue performing like this going ahead. When you win the gold for the country, who would not cry? I have helped the country to win the gold, so that is why I got emotional. When you get rewarded after doing so much hard work, you obviously feel very happy.” 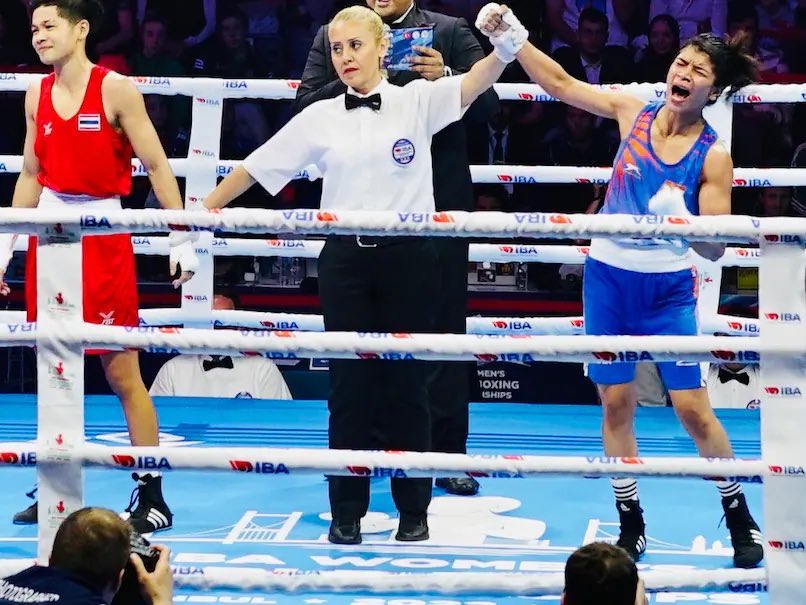 11 years after winning the world youth title in Turkey, it was only because of her sheer hard work and determination that she became the senior champion. She is overjoyed on being loved so much by her countrymen and trending on Twitter.

“I will work hard like this and try to give my best to win a medal in the Paris Olympics. I would dedicate this medal to all my countrymen who supported me throughout my career. Am I trending on Twitter? It was always my dream to be a trend on Twitter and to achieve something for my country at the world level is the biggest motivation.”

Shining bright at the top of the podium is our new world champion- @nikhat_zareen 😍🌟#ibawwchs2022#IstanbulBoxing#PunchMeinHaiDum#Boxing pic.twitter.com/H4Fcul9KJx

Congratulations were in order for this champ.

Congratulations to @nikhat_zareen for winning the Gold medal at the Women's World Boxing Championships. We all are very proud of you and your splendid achievement! Wishing you many more medals and titles 🙌 pic.twitter.com/Sl5tW5GDcx

Indian boxer. World champion. 5-0 victory. Thank you #NikhatZareen for telling the world what you are and what India is. UNSTOPPABLE pic.twitter.com/idV1yCGG7M

What a win this is @nikhat_zareen Congratulations, World Champion 👏 pic.twitter.com/64k9Zv4eQt

The new world champion is now eyeing at Paris 2024 Olympics. With this win, she has etched her name in the history of world champions after Mary Kom, Sarita Devi, Jenny RL, and Lekha KC. You go, girl!