Anu Malik who is currently seen as a judge in the eleventh season of the popular singing reality show, Indian Idol is back in headlines. A year after, singers Sona Mohapatra and Shweta Pandit accused the music composer of sexual misconduct, he was reinstated as a judge on the show.

This did not go down well with the singers and they have once again come forward to express their disappointment on the issue. Amidst the controversy, singer Neha Bhasin recently came forward and bashed Malik for misconduct that made her uncomfortable as a 21-year-old.

The singer in a series of tweets revealed that Malik had laid on a couch in front of her talking about her eyes and made her uncomfortable.

I agee with you. We do live in a very sexist world. Anu Malik is a predetor, i too have run away from his strange moves when i was 21. I didn't let myself get into a sticky situation beyond him lying on a sofa in front of me talking about my eyes in a studio. I fleed lying https://t.co/tQgStLrYyT

I fleed lying my mums waiting below. He even msgd and called me after that to which i stopped responding. The point is i went to give him my cd and hope for a chance at a song. He was older and shouldnt have behaved the way he did. @The_AnuMalik is an ugly pervert and does not https://t.co/tQgStLrYyT

Even though i have a brave DNA Sona 🙂 as you have known me the industry or the world was not an easy place as a young girl alone away from family due to many such Incidents or getting a hunch of such perverts. Perverts exist inside n outside our industry but why are we so https://t.co/VcCxryE8Ff

(2) so forgiving to the men, do we realise that is what gives them the strength to ruin our dignity, hide us women in our houses. I hid many times so as to not get myself in a sticky situation. Why is it ok? For a man who is predetor to walk free while we hide in shame n fear? https://t.co/VcCxryE8Ff

Last thing i wanna say is 19 to age 30 many older men tried to make their cheap advances oh ne rest assured i complained to the people i thought would bring justice. The Tv world says a womans role is of Ma, bhabhi aur behen oh yes i was told that too. So what is A man's role? https://t.co/VcCxryE8Ff

Shweta Pandit, who had accused Malik of sexually harassing her when she was 15-year-old too came forward to clear the air on why she did not raise her voice against Malik as a teenager.

“Even in 2019, we are being questioned as victims, after myself being a professional singer in this industry for 2 decades-some narrow minds-why we didn’t speak then? Really losers? Imagine what would happen off me if I did speak in 2001 when I was a school kid? Thank God for #MeToo,” she wrote.

Even in 2019, we are being questioned as victims,after myself being a professional singer in this industry for 2 decades-some narrow minds-why we didnt speak then?Really losers? Imagine what would happen off me if i did speak in 2001 when i was a school kid? Thank God for #MeToo https://t.co/7EEytDozpA

Asking for proof inspite of so many women & singers speaking up against the same pervert? Any damn guy who ever asked any of us for proof, after a person has been called out as a repeat offender by so many, should know they are molesters in the making! Full of hypocrites around.. https://t.co/tAOtMc0Jq2

Last year, Shweta, in a series of tweets spilled the details about the incident where Malik allegedly asked her for a kiss.

Had to go back to my worst memory as a teenage girl today to write this and speak up – its now or never. This is my #MeToo and have to warn young girls about #AnuMalik & let you know your #TimesUp @IndiaMeToo
Thank you @sonamohapatra for speaking up about him & supporting this pic.twitter.com/e261pGQyEq 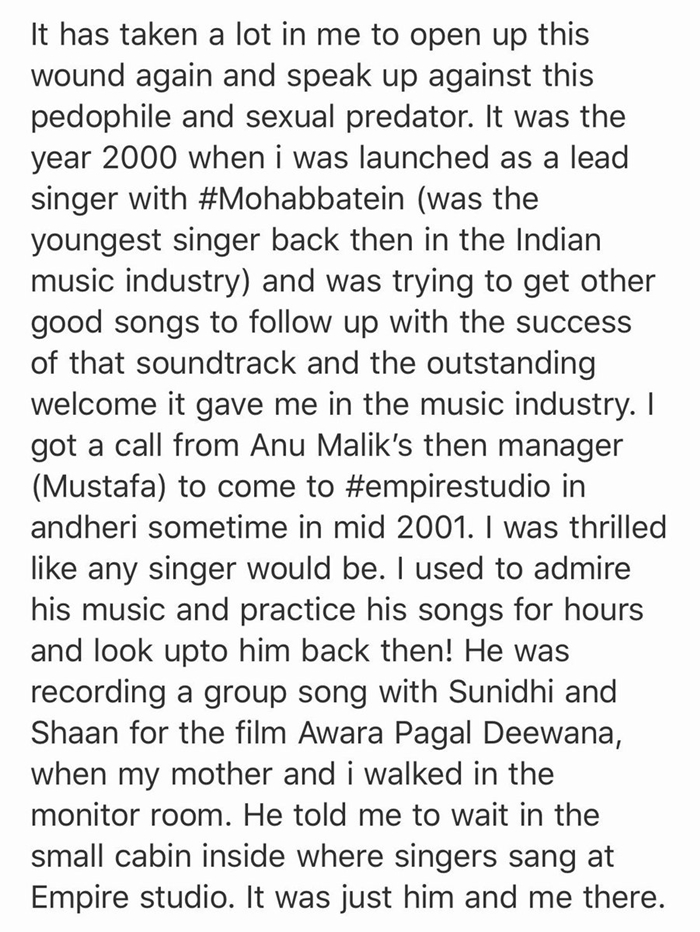 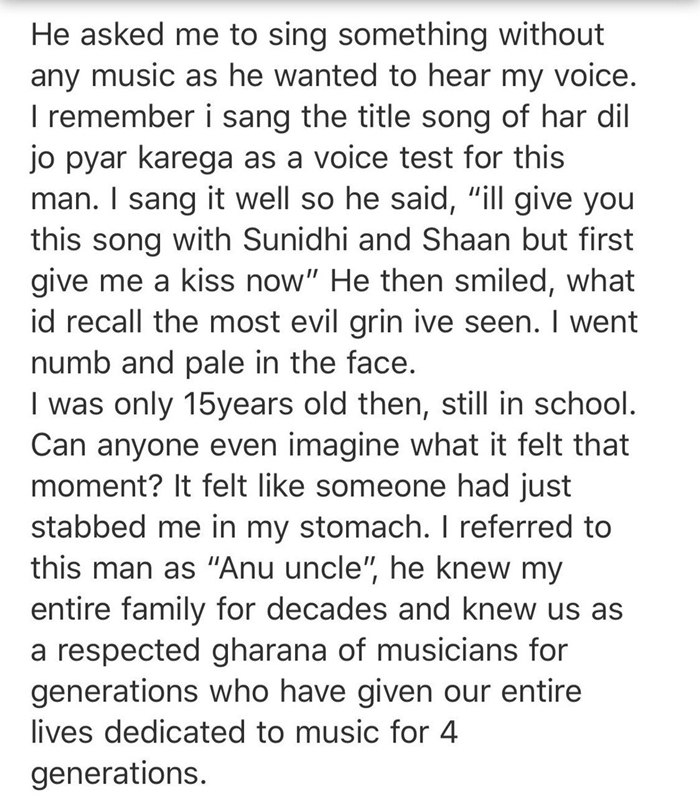 Earlier, Anu Malik’s lawyer had denied all the claims and told HT, “The allegations made against my client are emphatically denied as completely false and baseless. My client respects the #metoo movement but to use this movement to start a character assassination mission is obnoxious.”

No new comments on the matter have, however, been given from Malik’s side. Let’s wait and watch if things intensify after Bhasin and Shweta’s statements against him.

‘How To Bake Bread’ To Pasta Recipes, Here’s What Indians Are...