Airline giant United Airline has come under the scanner after one of it’s passengers, Tahera Ahmad faced religion based discrimination from one of the flight attendants. Tahera, who is a Muslim chaplain at Chicago’s Northwestern University, was travelling from Chicago to Washington D.C. and  documented her experience in her Facebook status:

“I am sitting on a United Airlines flight in the air, 30,000 feet above and I am in tears of humiliation from discrimination.” 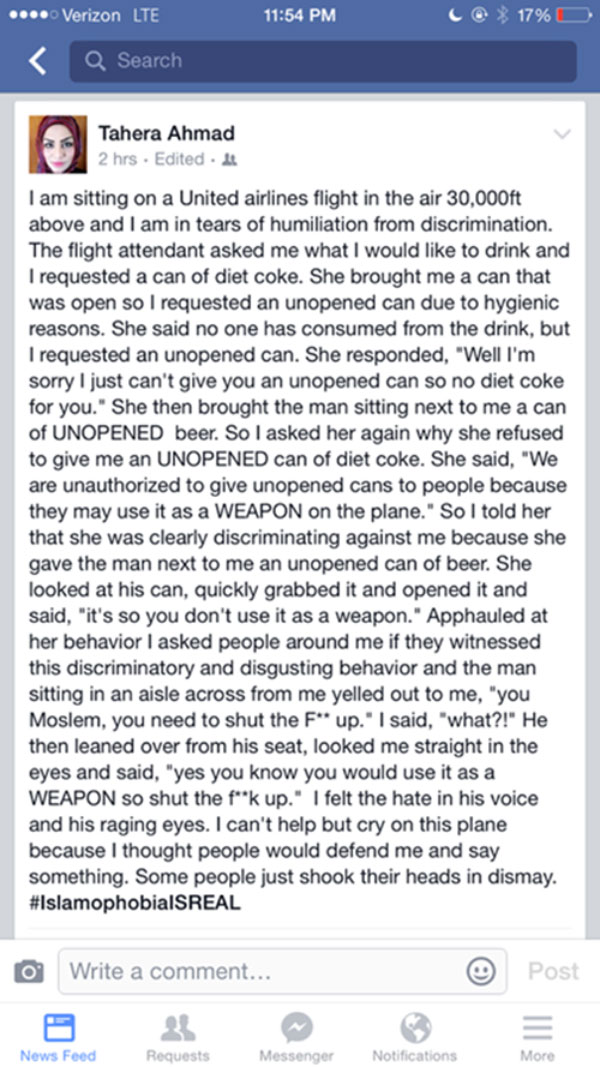 United Airlines spokesman Charles Hobart told the Guardian that the airline was attempting to contact Ahmad in order to “get a better understanding of what occurred during the flight”.

Ahmad told the Chicago Sun-Times that she received an apology from the flight attendant on behalf of herself and the other passenger, saying that the United employee had “acknowledged it was unethical and said he never should have said anything”. She also said that she had been spat on and had her hijab ripped off in previous Islamophobic encounters, but this encounter was especially demeaning.

Ahmad said the pilot also apologized and walked her to the service desk once the flight landed at Reagan National Airport, so she could file a formal complaint.

After the incident went viral, United Airlines faces a boycott from thousands, while people are tweeting in support for Tahera with the hashtag #UnitedforTahera.