Monsoon is finally here! And, so are the potholes and open manholes on the streets. Every year, the damage caused by the torrential rains in Mumbai pose a danger to people traveling by road. In fact, as per a 2019 report, as many as 356 deaths were caused due to falling into a manhole or drowning in sea-related incidents in the city in the past six years.

However, thankfully, citizens often come to the rescue of commuters during these distressing times. Recently, in a video shared online, a woman went out of her way to warn drivers about an open manhole in West Mumbai. The woman stood in the middle of a waterlogged street in order to alert commuters about a manhole that was hidden in the water, reports News18. 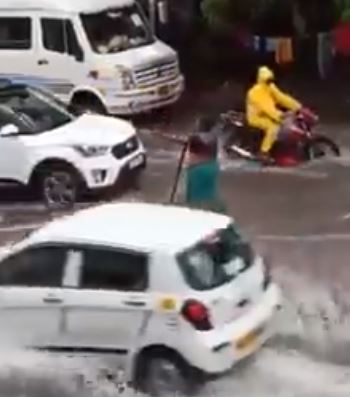 In the video, the woman can be seen asking people to move away from the manhole. She reportedly stood in the rain for five hours in the rain, just to ensure that no harm befell anyone, reports Times Now.

Have a look at the heartwarming video:

This Tulsi pipe road Matunga west. This lady has open the manhole and standing there since last 5 Hours.Hats off to her..

People online applauded the woman’s compassion during this time of adversity:

She'll make a tremendous Crisis Manager in any organisation!!

@anandmahindra
India is incredible. Beauty is social media lets us know if every second about our unsung heroes.

Presence of mind does not require education, hats off to the lady 🙏

Hats off to her efforts 🙏🏽🙏🏽 if not wrong she is trying to avoid water flooding in her roadside hut. Least people could have done is going slow and avoiding splash. Hats off again 🙏🏽🙏🏽

Hats off to the brave woman for her thoughtful gesture. We just hope authorities take note of this and take some appropriate actions for the safety of commuters.