Since childhood, we have heard about the epic tales of Ramayana and Mahabharata. We grew up watching the many renditions of these two epics, either on television or during various religious festivities in the form of skits. There are certain physical attributes which we associated with each of the characters.

Hence, when the teaser for ‘Adipurush’ dropped, it stood in contrast to our ideas and widely-believed characterisation of these great figures. Lord Ram wasn’t a very muscular and hypermasculine figure. Raavan wasn’t a sinister Khilji-like torturer. However, they are shown so in ‘Adipurush’.

Mukesh Khanna, who played ‘Shaktiman’ and Bhishma Pitamaha in ‘Mahabharata’, opened up about the ‘Adipurush’ teaser and said that the portrayal of Lord Ram and Raavan in the film is incorrect.

“Not everyone may agree with me, but Hindu Gods are not handsome. They are beautiful. They are not handsome like (Arnold) Schwarzenegger. Look at Ram or Krishna for example. They are not bodybuilders. They have a soft, docile, and grand look on their faces. No one can claim they met Ram or Krishna, but from whatever we have seen over the years, they have a feminine look. People who worship them never think of Ram or Hanuman with moustaches.”

He further expressed that a film like this won’t work because the audience won’t be able to relate to it if the characters are distorted.

“You call the film Adipurush, you may tell me that it is the story of a man from the Stone Age. Why do you have the title of Ramayan then? We had a huge beard for Bhishma Pitamah, you cannot simply show him as a clean-shaven man. Let me tell you that such a film will not work, because you want to use the faith that the audience has in Ramayan but you also challenge the faith.” 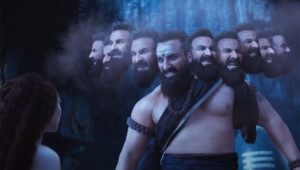 A VFX-heavy film cannot be a box-office success if its essence is far from the original story, he expressed.

“Only VFX or investing ₹100-₹1000 crore in a film cannot make Ramayan. It should be based on the values, and performances. You cannot use looks from Avatar and say we are making Ramayan. If you make fun of the characters, people may not just laugh at you but will be furious with you. You may say we are making a fictitious story about an ancient man, do not call it Ramayan.”

Films are made for the audience. If you take your imagination too far in the name of creative freedom, especially when it comes to epics such as the Ramayana, don’t you think there will be a barrier between the audience and the film?