The coronavirus induced lockdown has given us ample amount of time, but if you have a stable internet connection, you can at least keep yourself entertained. And like many people, even I scroll through all the social media platforms multiple times in a day. And on my recent scrolling spree, I found a shocking video that left me with a lot of questions.

In the clip, a monkey riding a bike grabs a baby and drags her down the alley. 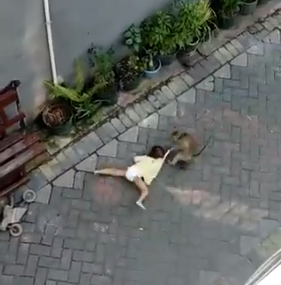 According to News 18, the monkey on a miniature bike approaches the bench where 3 kids were sitting. The leashed monkey then grabs on to a toddler and drags her down the lane, until a local comes to her rescue. Luckily, the animal leaves the toddler, and she immediately gets up and rushes back to her seat.

According to The Indian Express, the incident took place in Tanjungsari Village, Indonesia.

People online were startled by the incident. Some even commented that the animal was trying to kidnap the child.

Monkey rides up on motorcycle and attempts to kidnap child.

What the hell did I just watch?! pic.twitter.com/MvAg4emxdd

someone said something about Jumanji yesterday and now…I just…..this is the scariest thing I've everseen https://t.co/MbvnlKB9xS

OMG I would have shot that damn monkey.

People online also came up with several explanations for the animal’s bizarre act.

Apparently it is a trafficking effort. The monkey grabs the kid and somebody pulls them both back. If things go south, they let go of the rope and the monkey takes the rap.

My guess is someone trained the monkey to steal children to be used in the sex trade. …gross.

For those wondering: wtf? The guy at the beginning of the video has the monkey on a long leash/cord. He flings the monkey down the alley, and when the bike runs out of momentum and the monkey grabs the kid, he drags the monkey back, pulling the kid at the same time. pic.twitter.com/drcZge5nDP

it is a street circus monkey in Indonesia (we call it topeng monyet) and it has chain tied to its neck by its owner. this is banned in some cities now for animal cruelty. pic.twitter.com/3yuauTXN9T

Although the video might seem funny to some, it shows how animals are kept in captivity and trained to perform stunts like riding a bike just for our amusement. I think people resorting to animal abuse just to earn a few bucks should be put behind bars. What do you think of this incident? Tell us.