A lot of parents and parenting bloggers often take to social media to share the antics of their kids and relatives, finding solace when people share similar experiences. One such parenting blogger is 33-year old Mel Watts whose recent open letter to her MIL has plenty of fellow parents relating hard to it.

Not often but sometimes, everyone is up and dressed and outta the house without tears by 745am, this morning was one of them days – so we celebrated 💓💓 Thank you everyone for coming along the journey with me on @mondaysmuse_ when I posted my first #heymel I really appreciate the love and that you guys actually are excited for me 🙌🏻🙌🏻

According to Daily Mail, the Australian mother of four had plenty of things to say about her mother-in-law Trish following an incident that happened on her youngest son Sonny’s birthday. She was eager to find out what her MIL would buy for him after having made the suggestion to gift books. But it didn’t turn out to be that way after the boy received an “oversized super cheap” kiddie Tent instead.

She took to Instagram to share her thoughts with a long note. The caption begins on a hilarious note saying, “Yep. Here is what no one requested for their birthday. I mean it’s similar to a book right?!”. She also pokes fun saying, “Every time I suggest something to my mother-in-law she triples it in size and noise level.” Check out the post below:-

Yep. Here is what no one requested for their birthday. I mean it’s similar to a book right?! 💁🏼‍♀️ ;this is my mother in law – that emoji. Every time I suggest something she triples it in size and noise level. I know why, her son was an absolute wank job as a kid – She’s paying him back which in turn makes me pay. So here is the oversized super cheap tent she had to order for him that no one asked for. However Sonny thinks it’s the bees knees! I can’t wait for Nanny day – all kids get a shot of red bull and a face full of face paint. How’s your white leather lounge now Karen (Trish 😜) Please take a moment to appreciate Sonnys boy and stance and Ivie lifting a leg over her head – it’s talent apparently.

Following her disdain, she also joked about having her own revenge for the same. She humorously revealed her plans of getting back at her next time she takes her children to visit their grandmother. She jokes, “I can’t wait for nanny day… all the kids will get a shot of Red Bull and a face full of face paint. How’s your white leather lounge looking now Trish?” she said.

Her post attracted many comments from people who had their own ‘interesting’ gift stories to share. Here are a few:- 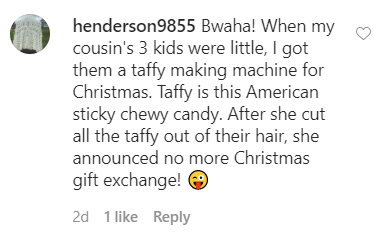 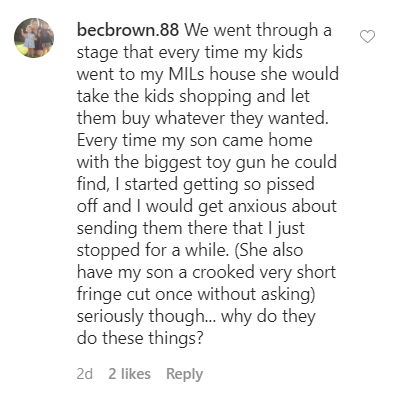 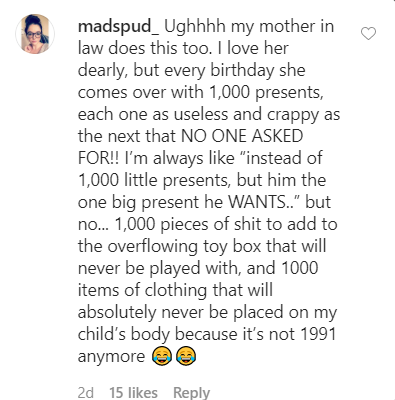 Married folks, do you feel her pain too? Have any wacky stories of your own? Share with us!