All of us, at some point or the other, have come across self-acclaimed Pundits who have happily taken moral policing as a service to mankind. Goes without a say, it is not only annoying but can implicate(and in many cases have)serious repercussion. And I was wondering if it is only me? Or the world is categorically cruel towards bachelors/spinsters? Turns out, not! There are more.

In one such incident, Mohit Agarwal, a resident of Palm Grove Heights, Gurgaon took to Facebook to make an exposé of the ordeal he had to go through. While restrictions on permitting or entertaining friends of the opposite sex are not news, the guardians of the galaxy have now problem with two-wheelers. Yes, no kidding! Read his entire post here. 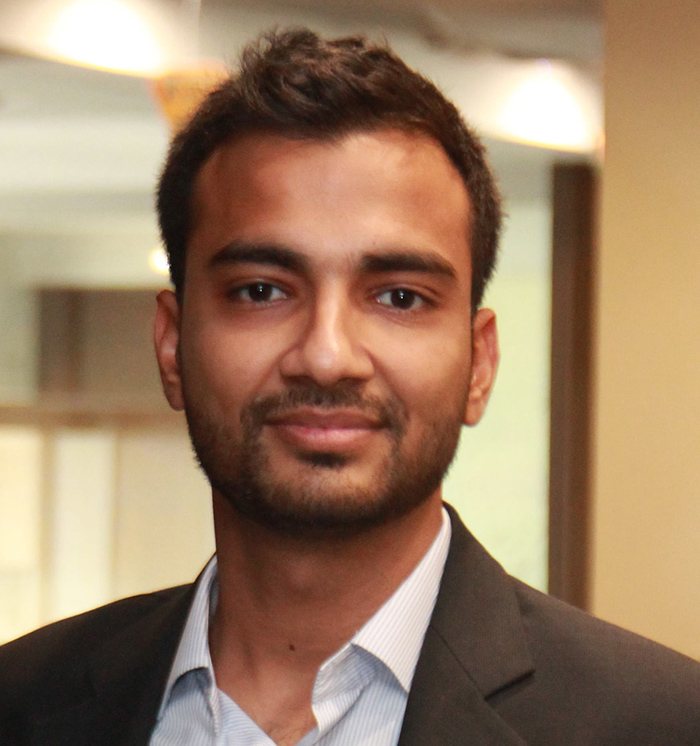 📣 Follow Storypick on Instagram! Click here to follow @story.pick
Sometimes life in Gurgaon makes you justify your right to live without humiliation.
Hello All, Wanted to narrate to you a harrowing experience that I faced at PALM GROVE HEIGHTS (Ardee City, Sector 52, Gurgaon).

This society is newly made (just 5 months old) and 70% residents are bachelor tenants. Yet the society administration has taken it upon themselves to morally police them and make their lives as difficult as possible. There are society’s which clearly declare that they don’t allow bachelor tenants – I think that is more noble than what Palm Grove does.

So coming back to the story: During my masters at Europe, I had made many friends. One of them, a girl from Barcelona, was coming to Intern here in Delhi at a Human Rights organisation. She wanted a place to stay for 3-4 days before she could rent a flat for herself. I volunteered to host her. On a Saturday evening, she arrived at the society, coming directly from a foreign land. The society guard stopped her – saying girls are not allowed at unmarried boys’ house! (I had heard this rumour floating around about this restriction by the Society RWA, but felt it was too ridiculous to be true).

I and my flatmates had a huge argument with the guards and then the society administration. I even called up my landlord, who supported us totally. He mailed the society admin/ RWA to allow the guest in our flat, but they rejected the request! YES – they rejected it. We even asked for a copy of the society rules which barred entry of girls to bachelor tenants’ house, but there was no such formal rule. (Making such a rule is illegal by the way)

So effectively there was no basis for stopping her from entering my house, except that these guys took it upon themselves to morally police us. For 3 hours we negotiated on a topic which was too ridiculous to be negotiated upon. And it was super humiliating.With all the shameful insinuations flying around. Less for us and more for the person who has just landed in India – ironically a mild taste of what human rights violation in India feels like.
Finally, she had to go rent a hotel.

In all this ruckus, I had called up the society president Amrik Singh Nimbran and said his rules were stupid and didn’t make sense. Next day, he came to my house looking for me. He said, “I am retired DG of police, and I know very well how to handle criminals like you”. Criminals, really!!. He even threatened next time we do something like this – he will ensure that we get bashed up!
But this is not a one-time case, this society has been doing it quite frequently. It has happened to other tenants too. Entering the premises with a group of friends is like entering a club – the bouncer guard decides whether your friends get in or don’t.

All their policies are geared to get the bachelors out of here. Why don’t they create a proper policy and stop renting it to bachelors is not understood. They even stopped entry of motorcycles inside the premises, because most bachelors have two wheelers. So you are okay with massive SUVs but not a humble scooty entering the society premises, someone please explain the logic! 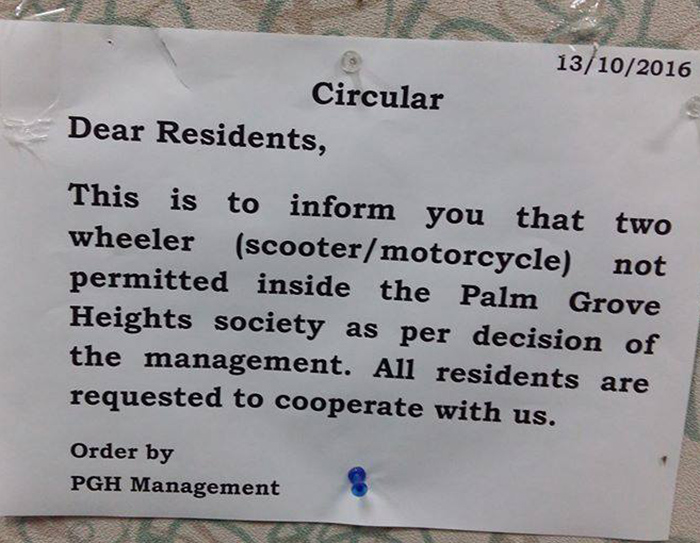 Why this rant on Facebook :
1) Because I want to expose the double standards of Gurgaon’s MNC “family” crowd living in gated societies.
2) Because no person in future should accidentally rent in a house in Palm Grove Heights.
3) Because I want you to spread this as much as possible.
That’s all folks, and get married soon, and buy a car, and be a man – because a bachelor doesn’t have equal rights! And a woman ! And a person from another country! And a two wheeler driver!

Update 1:
So, after this post, I got many messages from tenants staying in this society describing their experiences. Attaching the screenshots. So this was not a one-off case with just me, but a concerted effort by the management.

Update 2:
I shot a mail on 29thOct, to Global, APAC and India heads of Colliers describing the incident and the complicity of the Colliers estate manager.
The Colliers estate manager – Sanjay Chaudhary- rang me up today (30th Oct) , saying he was being pressured by the retired DG. Amrik Singh Nimbran to enforce such rules.
But honestly, Sanjay Chaudhary himself was calling the judgement that day. Nimbran came into the picture next day when he came wanting to bash me up because of my SMS and call to him.
Anyways, Sanjay was apologetic (or appearing to be) and said such incidents won’t happen in future.

Amidst demand for reservation and regressive nations, the lawmakers of the society will have to do a lot more than just flyers! And with such progress, where exactly are we heading? Only time will tell.