In many Indian households, dating is looked down upon. The elders in the family tend to have a strong say on who their sons and daughters should marry. Hence, the youngsters often end up breaking up with their girlfriends and boyfriends. They give in to family pressure and marry someone who has been chosen for them by the elders.

A user on Reddit addressed the Indian men who left their girlfriends to marry the woman of their parents’ choice and asked how married life has been for them.

“Do you feel any sense of agency and control in your life by now? Are you attracted to the woman your parents chose for you? Do you think of other women in your arranged marriage? Any regrets or resentment towards the old relationship with ex, current relationship with wife, or current state of affairs/relationship with your parents? Have you sought out emotional or physical affairs? If so, why? Is divorce an option for a chance for you to be actually happy?” the user asked.

Indian men, if you broke up with your love-based girlfriend to marry the woman your parents arranged for you, how’s married life now? from india

Responding to the post, one guy shared his ordeal of marrying someone of his parents’ choice after being forced to leave his girlfriend.

“Initially I felt like a loser (which I was). After the breakup, I went through a period of angst and realized my mom basically emotionally blackmailed me. Yes, the attraction and understanding took time to build up. It kinda helped that she was also forced to break up with her bf, so we kind of understood where we had come from. I would be lying if I said that I didn’t think about my ex or other potential women I had met with before I got married,” he wrote. 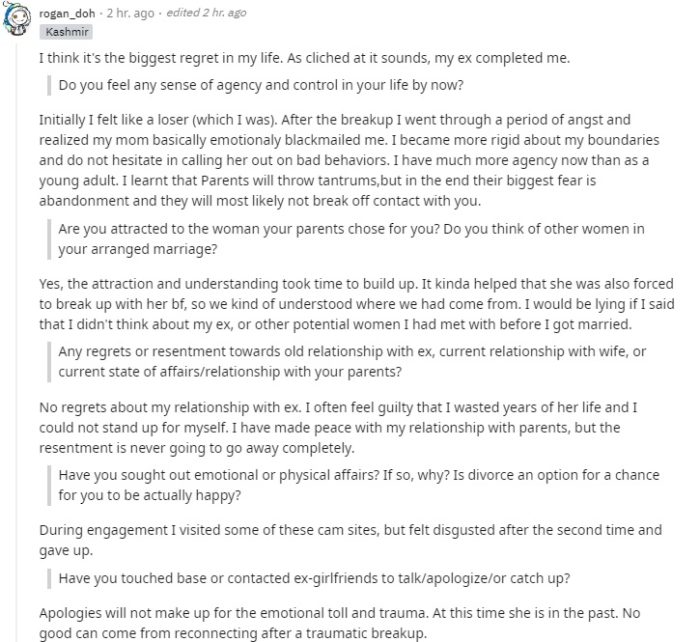 Several others shared stories about people whom they know who went through the same.

Mostly, the marriage didn’t have a happy start as there was the constant presence of the ‘ex’.

Overall, these people weren’t happy in their lives after having left the love of their lives and the following arranged marriage.

Do you think people should give in to family pressure and marry someone against their own wish? Tell us.