Most of us often wait for those long holidays when we could explore another city and take a break from our monotonous lifestyle. Even though travelling and vacation should be a frequent activity in our lives, people often become negligent of tourist-appropriate behavior when roaming in another city.

Earlier, tourists littered Himachal’s ‘Triund Trek’, and hundreds of them crowded ‘Kempty Falls’ in Mussoorie with no social distancing.

After ruining some of the picturesque places by scribbling on mountains and hills, spitting at city corners, and throwing garbage in places except the dustbin, some people have reached the Pangong Lake in Ladakh to mess up the natural habitat in the vicinity.

Taking to Twitter, a user named Jigmat Ladakhi shared an old video wherein a couple of men, in a luxury car, were seen rash driving on the crystal clear water body, evidently for their merriment. 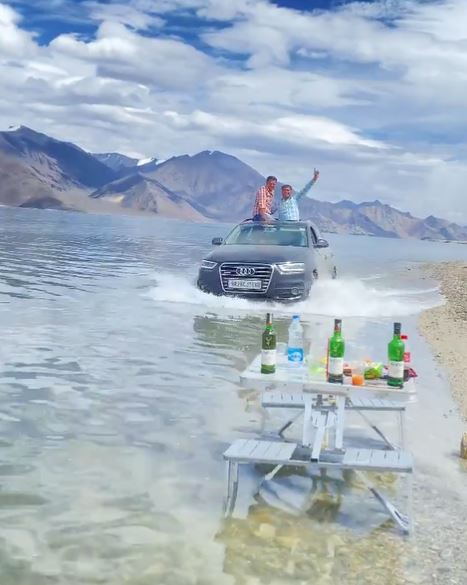 Jigmat wrote that such irresponsible tourists are killing Ladakh which has more than 350 birds species and lakes like Pangong are home to many of them. Such negligent acts may put their habitat at risk.

I am sharing again an another shameful video . Such irresponsible tourists are killing ladakh . Do you know? Ladakh have a more than 350 birds species and lakes like pangong are the home of many bird species. Such act may have risked the habitat of many bird species. pic.twitter.com/ZuSExXovjp

The video irked a lot of people online who called for strict actions including hefty fines and community service for the offenders.

How we've made it "so normal" to litter in public and get away with it. Such people are absolute disgrace. Doubt if they even know what ecologically sensitive even mean. We need stricter laws. https://t.co/Gh84RErEX6

The ministers of state should take strict action against these miscreants. Penalise them & make it known – so that other tourists refrain from indulging in this nonsense. People like these should be banned from visiting such sites! https://t.co/3sp64PendV

If this is the kind of fun you want don't go to Ladakh. Such a stunning lack of respect for your surrounding and its people. https://t.co/vPGtNcWzMn

This is how some tourists behave in the fragile ecosystem of Ladakh https://t.co/AqIfgxa5uX

Pangong lake is so crystal clear and serene, I didn't even want to put my foot in it, not to make it dirty.

I wish money could buy some common sense to feed into the peanut sized brains of these folks. https://t.co/8z6J8jMZaW

@jtnladakh sir plz look into it..
The perpetrators must not b spared. Nobody can b allowed to destroy the environmental diversity & beauty of lakes of Laddakh. Hooliganism in the name of tourism can't b tolerated. https://t.co/ePTNbQFcrS

Hefty fine and community service must be imposed on such irresponsible citizens. https://t.co/gUihX6Rzjb

Should impose high fines for damaging the environment. https://t.co/vnjbswIRiQ

Every single car entering into Ladakh should be checked for alcohol. Ask them to go back/heavy consequences . Also disallow unrestricted private cars/vehicles via road. Make only local tourist vehicles to enter state. No other way to curb this menace. Pathetic https://t.co/Y85LXmueAp

A couple of people said calling out tourists could decrease tourism in the city.

Oh Bhai try to ntegrate with the rest of the country. You are nothing without tourism. You get benefits from the tax rest of India pays. Build good infra around these places so that there is minimum damage. https://t.co/FdcITE8us2

They want tourism but want to demean tourists. Let those who burn burn, Have come to taste, taste it, dear. https://t.co/gMTi5xUdtv

The moment our ‘fun’ starts hurting people and the surroundings, it’s not fun anymore. Should they be penalized?