While enjoying a drink occasionally is fun, it is crucial that we consume alcohol responsibly. After all, we might do things that we regret later while in an intoxicated state. So, for the safety of ourselves and others, it is always advised that one always drive sober.

Recently, an intoxicated man from Kolar, Karnataka ran over a snake with his bike. The drunk construction worker then tossed the viper around his neck and started biting off its skin, reports NDTV. 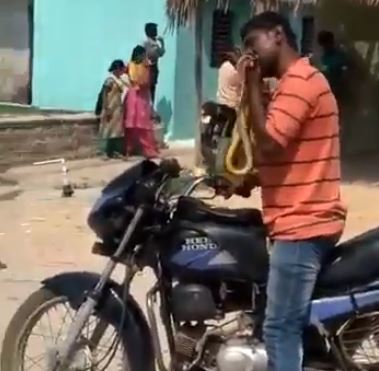 The man, identified as Kumar, was going back home with his newly purchased liquor stash when the snake came under his two-wheeler. Unfazed, the drunk man wore the injured snake around his neck as he yelled, “How dare you block my path.”

“The snake has troubled me earlier. I was angry as it came under the wheels this morning too,” Kumar was quoted saying by Times of India.

A #drunk man kills a snake by biting it in full public view.The incident took place in Mulbagal Taluk of #kolar District… pic.twitter.com/mY9JfVgKrp

After continuing to ride for some distance, Kumar stopped and started biting the snake till it was torn apart into pieces. Villagers gathered and called the cops as he went about the gory act. Some people even clicked pictures and took videos of the horrifying incident.

However, the snake had already died when the police arrived 30 minutes later. But Kumar was safe even though he was not aware that it was a venomous snake. He said sighting and killing snakes was a common act in the village. While Kumar is lucky to be alive, what he did is not acceptable at all. Animal cruelty is a crime. What do you think about the incident? Tell us in the comments below.