Arranged marriages in India are a different ball game altogether. At a time when websites like Shaadi.com weren’t there, matches were searched for in the matrimonial section of the newspaper. Some of the matrimonial ads were epic!

Even today, several families ditch the new age matrimonial websites and matchmakers for the good old newspaper matrimonial ads. However, in a matrimonial ad that was shared by businessman Samir Arora, software engineers were specifically told to not call!

According to the ad, the bride’s family, who were rich and business-class, were seeking a groom who was IAS, IPS, a doctor or a businessman but not a software engineer. 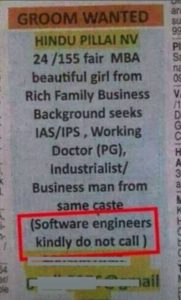 Samir Arora joked that the future of IT professionals looks bleak.

Future of IT does not look so sound. pic.twitter.com/YwCsiMbGq2

While this matrimonial ad is from a couple of years back, it resurfaced and tickled many bones on Twitter. Here’s how some people reacted:

Looking at the ad, the whole country’s future doesn’t look so sound.

The arranged marriage market in the country doesn’t even need to try to be hilarious AF!