I don’t think there would be a person who wouldn’t know that smoking or carrying a lighter inside a flight is a punishable offense. An army of security personnel has also been recruited inside the airport premises to ensure that no one breaks this rule.

However, despite the strict checking, a man successfully sneaked in a lighter inside a flight. Not just this, he had the audacity to light a cigarette inside a flight with passengers and even record a video doing so. 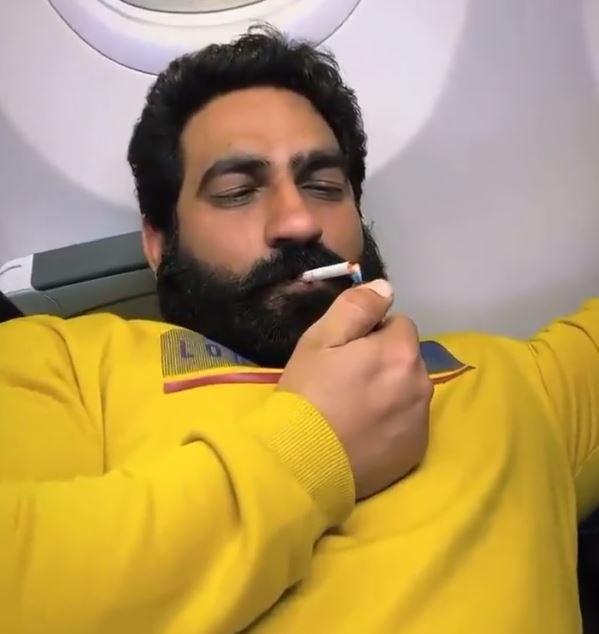 The video of the ‘social media influencer’ identified as Bobby Katariya smoking a cigarette inside the flight has now gone viral.

In his defense, Katariya said that the video is from a foreign land and not in India.

The internet was appalled after seeing him show off this punishable act. Some also raised concerns over airport security.

This person is exploiting rules in blatant way . He must be booked & bared from travelling in any flight further . @DGCAIndia https://t.co/0o23kclZ2n

He is risking the health and lives of all in the flight. He should be punished as per the law and his punishment should be a lesson to all those who smoke in public places. https://t.co/uBMrWeOFWB

this is disgusting complete security lapse of Indian Airport @JM_Scindia sir he should be banned to enter at Airport @AmitShah sir take neccesary action against Airport Authority who alloed him or who didn check his cigrt n matchbox https://t.co/LYzhSvFKCV

Such disgusting BJP goons don’t get punished for anything. https://t.co/joFR8SUqrq

A tight slap on security 😡 https://t.co/ZVlRmrqFE7

According to Hindustan Times, the video dates back to earlier this year when he was on a Dubai-Delhi Spicejet flight. When he was caught in the act, the Indian budget airline put him on its no-flying list for 15 days, in February.

Reacting to the old video that now went viral, Union Minister for Civil Aviation & Steel, Jyotiraditya M. Scindia said that there will be no tolerance for such hazardous behavior.

Investigating it. There will be no tolerance towards such hazardous behaviour.

Even though the airline said that it was an old video and barred him from taking a flight for 15 days, his action is worth all the criticism. This also calls for the airport authorities to tighten their security.