Home Food For Thought Man Pops The Question To GF In Front Of Eiffel Tower Dancing...

We’ve all grown up watching movies that show Shah Rukh Khan spreading his arms to embrace the love of his life. After all, his ultra-romantic antics in almost every film he did made him the ‘King of Romance’ in Bollywood.

And, many of us dreamed of dancing to romantic numbers with our man in snow-clad mountains donning a chiffon sari just like the heroines in SRK’s films did.

SRK changed the meaning of fairytale romance for us all. We no longer want our Prince Charming to ride a white horse but we want him to be atleast 10% romantic of what SRK has been in his movies.

And, the dream proposal that Shyam Shah who was in a long-distance relationship with Shivani Bafna for a year and a half pulled off recently has certainly raised the bar for the youngsters.

While Shyam lives in New York, Shivani is a resident of Mumbai, reports India Today. They had last seen each other in July 2019. Shyam invited Shivani to New York and received her at the airport in a limousine. He gifted her a red gown took her to Eiffel Tower in Paris to execute his fancy proposal for his girl. 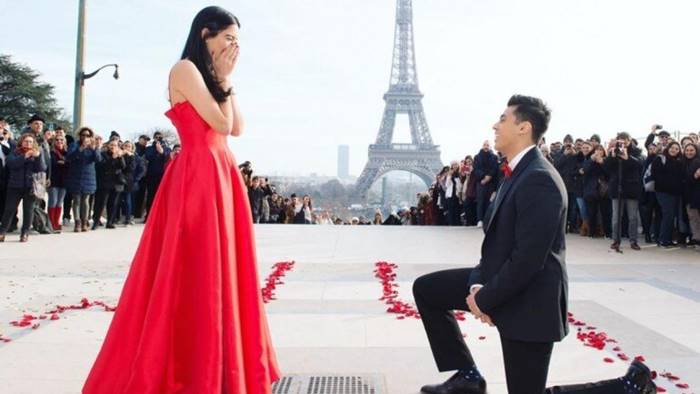 Accordingly, with the iconic monument in the backdrop, Shyam began dancing to Hrithik Roshan’s ‘Tu Meri’ from ‘Bang Bang’. He then danced to ‘Mere Naam Tu’ from Shah Rukh Khan’s ‘Zero’ and went on his knees and popped the question to Shivani, reports Republic World.

The video of the entire proposal broke the internet lately with people going ga-ga over Shyam’s super romantic efforts for Shivani.

This surely looks like a scene straight outta a Bollywood movie. What do you think about Shyam’s romantic proposal for Shivani? Tell us!