The high-octane clash between India and Pakistan at the ICC Cricket World Cup 2019 became the topic of discussion for a number of reasons. While Rohit Sharma’s phenomenal 140-run knock dictated the proceedings in Manchester, Pak skipper Sarfaraz Ahmed became the subject of trolls for his hilarious yawn behind the stumps. And of course, how can we forget the heartbroken Pakistani fans who went on to troll their own team following the humiliating defeat?

But that’s not all. Now, we have another moment from the Indo-Pak encounter that’s going viral on the internet.

In a clip making rounds on Twitter, we can see an Indian couple sharing a beautiful moment of love. The video starts with the young man going down on his knees to propose to the girl and you bet, he couldn’t have chosen a better venue to pop up the all-important question. 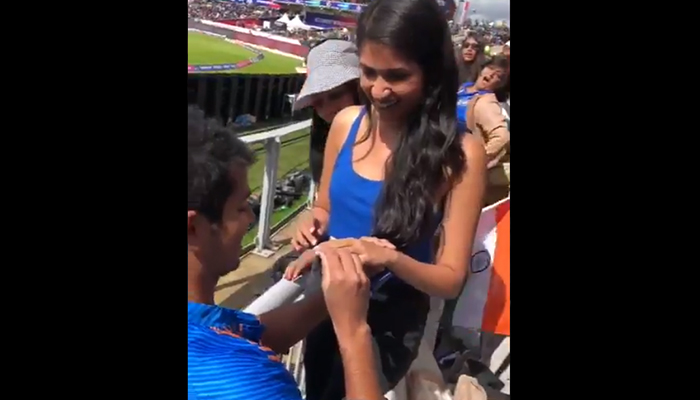 The girl was clearly taken by surprise initially but as the dude put the ring onto her finger, she obliged with a passionate hug. The couple dressed in Blue were surrounded by a whole bunch of Indian fans who appreciated the moment by clapping. 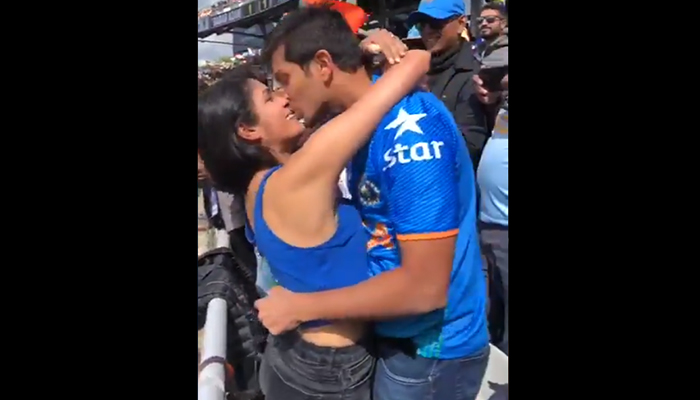 However, the icing on the cake was the kiss that followed.

Here is the video that the newly engaged girl tweeted!

Netizens were happy to see the lovebirds involved in a romantic moment and filled the post with positive comments.

Congrats. Be a perfect better half of each other. 🙏

I like his confidence. He is confident that India is winning this match and he can focus on other less important things.😃😃

Thanks to Indian Cricket team for not ruining that guy's plans.

Must be a legend this guy 😉

Haha, this one is incredibly special

Now that’s how you make your proposal a memorable one. Isn’t it? Congratulations to the lovely couple!

Newlyweds Trapped On A Maldivian Honeymoon Due To COVID-19 Say, “It...

Bride & Groom Arrested With 50 Guests For Hosting A Wedding...