Most of us wonder what it is like to travel first class. Do they give you fancier meals and a bed-like seat to sleep in? Do you get extra leg-room and unlimited internet data? Maybe all these questions were in the mind of 88-year-old Violet when she said it was her “dream” to travel first-class. And her dream came true thanks to a fellow passenger!

According to a report by News18, a passenger kindly gave his first-class seat to the 88-year-old women on their way from New York to London via Virgin Atlantic airlines.

The passenger named Jack got friendly with Violet while they were in the airport and got to talking. It was then when she mentioned that she always dreamed of what it would be like to sit in front of a plane. Jack then realised that his first-class seat would matter more to the old woman than himself.

When the boarded the plane, James saw that Violet was seated near the toilets. He went on to ask her to swap seats with him. Violet then went on to sit in first-class, while James sat near the toilets in the economy section without any complaints or demands, reveals Fox News.

A flight attendant had penned down the entire incident and posted it on Facebook. She said that nobody asked James to do the deed. He did it “out of the kindness of his own heart”.

“You should have seen her face when I tucked her in her bed after supper,” she wrote.

Violet was on her way to New York to visit her daughter. She told the flight attendant to take a few pictures of her sitting in first-class and with the rest of the crew as proof to show her daughter! 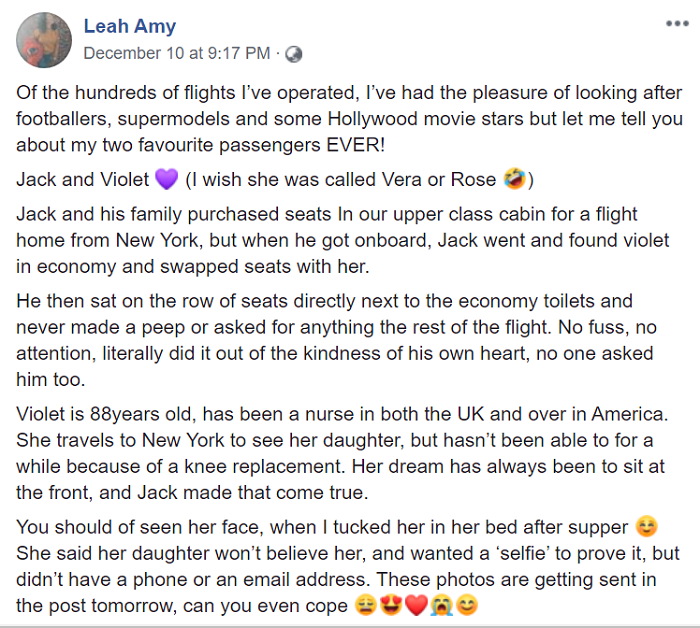 People on the internet are hailing the man for his kindness. Have a look: Imagine the joy of the old woman watching her dream come true. The world needs more kind people like Jack!