Home Bizarre A Man Ate The ₹85 Lakh Banana Duct-Taped To A Wall In...

Do you remember the banana duct-taped to a wall? The one by Italian artist Maurizio Cattelan that went on sale at Art Basel Miami Beach for $1,20,000 (Rs 85 lakh approximately). Well, someone reportedly ate the expensive banana.

No, we’re not kidding you. According to CNN, a performance artist unceremoniously grabbed the banana off the wall and ate it, amid a crowd of stunned onlookers, some of them taking videos of the incident.

David Datuna, who describes himself as a Georgian-born American artist, called the act an ‘Art performance by a Hungry Artist’ as he peeled the fruit and took a bite. 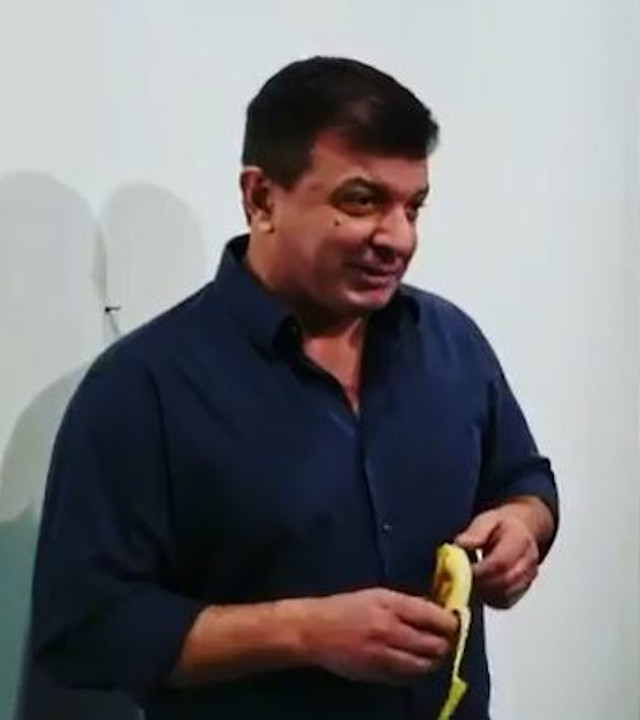 Lucien Terras, director of museum relations for Galerie Perrotin, said “He did not destroy the artwork. The banana is the idea,” quotes News 18. Apparently, the value of the work is in the certificate of authenticity and the banana is meant to be replaced. A replacement banana was taped to the wall about 15 minutes after Datuna’s stunt.

“This has brought a lot of tension and attention to the booth and we’re not into spectacles,” Terras told the Miami Herald. “But the response has been great. It brings a smile to a lot of people’s faces.”

However, while some people found the act hilarious:

We all know where it should go next. pic.twitter.com/FWFqeIUylZ

YALL IM DEAD REMEMBER THAT 150k BANANA ON THE WALL OR SMTH? A GEORGIAN DUDE ATE IT AND SAID THAT WAS A PERFORMANCE “hungry artist” AND NOW THEY MIGHT ARREST HIM😭😭😭😭😂😂😂😂😂😂😂😂😂

Many others felt the money and the banana could have been put to better use. Take a look:

This is how sick society has become: taping a banana to a wall is considered "modern art" and is worth $120K.

What's the possibility that the "artist" is a uppity liberal living in a gentrified neighborhood, feigning care for poor people? His "art" could feed a hungry person. https://t.co/NJncDvc3fx

Sad it was a performance artist and not just a hungry guy.

So it should have been. It was better used as food

Exhibit A that some people have too much money and it needs to go to people in need.

Yet we have millions of poor ppl in this country smh

All this while we thought Rahul Bose was overcharged for a banana. Well, you could buy 25L bananas for the price of this banana artwork after all. What are your thoughts about this pricey banana?