Man Calmly Eating Chips Unaffected By The Massive Brawl Around Him, Inspires Memes

Most of us would just freak out on witnessing a chaotic brawl anywhere around us. We would try resolving the issue, call for help or just escape from the spot, right? But when a massive mass brawl broke at a kebab shop on Friday in the presence of some customers, a man was seen seated calmly at the table, unaffected by the fight around him.

The incident took place in Portsmouth, UK last week. And apart from the intruders who indulged in a fistfight with a man, a 52-year-old customer identified as Chris Hill was also captured on the shop’s CCTV camera, reported The Sun. 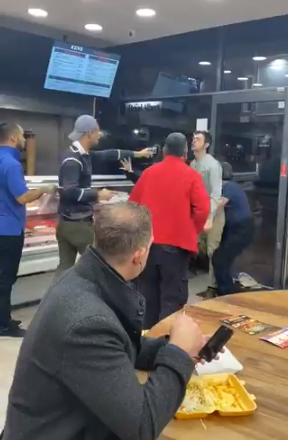 The video shows several men, including the store staff wrestling and throwing punches at each other. However, contrary to what most of us would do, Chris was seen enjoying his meal as the hell broke out in the store. He calmly enjoyed his chips while listening to the radio on his headphones. 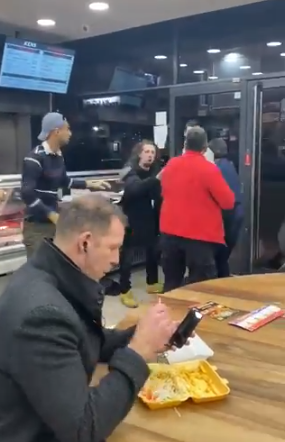 The video of the brawl was shared on social media and people couldn’t help but point out Chris’ reaction to the brawl.

Earphones guy is so unbothered. 😭 pic.twitter.com/BrYmtHVf6X

How I’m minding my business in 2020 pic.twitter.com/3nTKsWBOPV

The guy sitting down….. pic.twitter.com/Fkk3boZ6zB

dude at the table said pic.twitter.com/1oVuC5cWmM

Really don't know what to make of this guy's reaction.
"Oh well, best not get involved. I'm just here for my dinner" pic.twitter.com/5a1N415Hn0

The man eating his chips and watching the show is me all over pic.twitter.com/X98KPUzBo5

“I thought about moving at one point but I was enjoying my kebab and chips… although the chips weren’t very nice.”

“I turned to see a man and shop worker throwing things at each other and then this tall guy kicked the food counter as the fight escalated moments later into a huge brawl involving several members of staff and two aggressive male customers.”

Hands down, Chris is the man of the moment. Even I believe no matter whatever happens, never waste food. Food is bae, right?