Fox Feeds Its Milk To Baby Koalas In Australia, Twitter Calls It ‘Greatness Of Motherhood’

Reports have suggested that nearly more than a billion animals have perished due to the Australian bushfires. 25,000 koalas are estimated to be dead because of this natural tragedy that burnt their homes. While many people rushed to help the poor animals, with some rescuing them from the fire itself to others providing them with water, not all animals could be helped. During this disastrous time, animals stood for animals.

According to a report by India Today, a mama fox feeding its milk to a bunch of baby koalas has gone viral on the internet. The video is allegedly from Australia and shot during the bushfires. 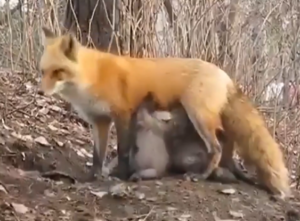 While the authenticity of the video cannot be a 100% guaranteed, the area surrounding the animals does look like a burnt forest.

Many animals lost their offsprings to the fire while many newborn animals lost their mother. Seeing the compassionate nature of the fox, people of the internet have come up with a new word – ‘animality’ which means ‘humanity for animals’.

Let's call it compassion, nowadays humanity is a joke.

The spirit of motherhood is unlike anything else. Humans have so much to learn from these animals!