Madhya Pradesh Dog Rescues Baby Monkey, Now They Roam Around The Village As Mother And Son

Adoption is a very common thing among humans. We adopt humans, cats, dogs and we have the freedom to choose from any other species unless they’re endangered or harmful in any way. But the practice isn’t very popular among other animals. And yet, Madhya Pradesh witnessed the unlikely duo of a dog and a monkey roaming the streets.

According to the Daily Mail, in Madhya Pradesh, a baby monkey was attacked by a pack of dogs. Luckily it was rescued by a kind-hearted, one-eyed dog named Ruby. 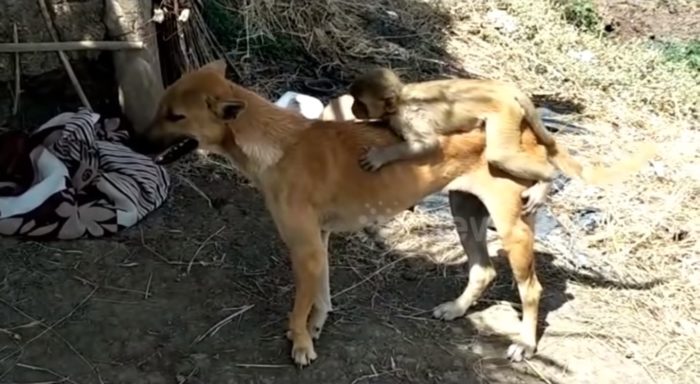 Ruby doesn’t have any puppies of her own and that could’ve been the reason why she rushed to save the orphaned monkey. Now they wander through Kanskheda village with the monkey safely perched on Ruby’s back.

Check out the video here:

Ruby’s owner, Suresh Prabhy informed that the doggo is extremely protective of the monkey. So even when he leaves her back, she keeps an eye on her. He said,

“The baby monkey was roaming along in the area when a pack of dogs surrounded him. Before they could rip him apart, my dog Ruby intervened and saved his life. It has been more than one and a half months since the pair became the centre of attention in the entire village.”

One look at the dog breastfeeding the monkey will tell you that they share a very strong mother-son bond. And apparently, they’re pretty popular as nearby villagers frequently come to the town in Seoni Malwa of Hoshangabad district to meet them.

The story of this monkey and Ruby and the motherly love between a beagle and a possum are important lessons about adoption and how we should learn to give love to those who need and deserve it. And I will pray that the relationship between Ruby and her adopted son stays strong forever.