Wrote lyrics for #AnkhonDekhi in 2014 with Sagar Desai as the composer. The music company @TimesMusicHub didn't put the music online even after repeated requests.

Now I find they put the full album jukebox in 2018: https://t.co/I0CmROURff but have NOT CREDITED me & Sagar Desai.

Screenwriter and lyricist Neelesh Misra was the next in line who said that for OTT platforms, the lyrics writer stands at the end of the line.

Music launches have been held without the lyricist getting prominence. For years, lyricwriters have got no mention on most radio stations or TV reality shows playing songs. And now OTT platforms have taken the same route. The lyricwriter stands at the end of the line. https://t.co/KhYnV1Dee7

Now, hinting at this injustice done to them, 15 contemporary lyrics writers from the industry unanimously sang the ‘Lyrics Writers’ Anthem’ demanding respect and credit for their work. 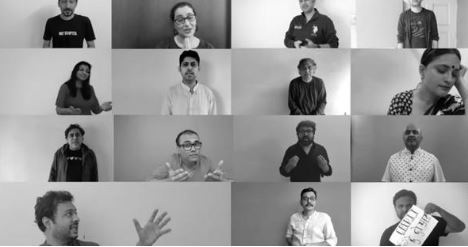 In the captions, Varun wrote how “On official YouTube channels of almost every big music company, hundreds of song videos have wrong or missing credits of lyrics writers.”

Talking to Times Of India, Swanand Kirkire said, “Music apps don’t give credit to lyricists and we cannot search by our names. Some credit the composer and lyricist together – for instance, AR Rahman and Gulzar – not on the main screen, but in a tab buried somewhere.” He further added, “We aren’t fighting or accusing anyone, we are just saying this is the problem, tell us what can be done. Since I’m also a singer, I access the music apps to see the songs sung by me. But I have noticed that songs written by do not have the due credits.”

Lyricist and screenwriter Kausar Munir popular for tracks like ‘Suno Na Sangemarmar’ and ‘Bhar Do Jholi Meri’ said that giving credits to songwriters is “natural information related to that song and this should be available on every platform that is showcasing these songs. Why is this even something that needs to be spoken about or discussed?”

Giving his opinions on the matter, lyricist Amitabh Bhattacharya, known for his songs like ‘Channa Mereya’, ‘Gerua’ among others, says, “The lyricist is also the creator of the song in equal measure as the composer. People need to and should know the name of the person who has coined the line or phrase by which they recall or remember a song. This should be strategically practised so that it becomes a norm of modern music culture.”

Demanding that all official online music channels credit lyrics writers prominently and correctly, Varun Grover said, “We, the lyrics writing community of the Hindi film industry, demand our moral rights over these songs to be credited and displayed with prominence on every platform and channel playing and monetising our labour of love. All streaming apps credit and display lyrics writers on the main screen of the song and make the name tags searchable. All we have as our earnings are these songs. All we demand is our right. All we need from you is a change in the mindset to respect and credit the creators.”

Kumaar who penned the famous songs ‘Baby Doll’, ‘Chittiyaan Kalaiyaan’, ‘Sooraj Dooba Hain’ among others suggests that this injustice shall come to an end “when radio stations and media start putting up pictures of lyricists along with the pics of composers and singers, then things will begin to change.”

Everyone gives their heart and soul while working on their creations. It is high time that companies who monetise their work at least give credits where due.