People, meet Lyndsey Scott. She’s a 34-year-old woman with loads of laurels on her hat. She’s a Victoria’s Secret model, holds a dual major in Theatre and Computer Science, and is the first African-American model to land an exclusive contract with Calvin Klein.

But there’s more to Lyndsey than her strikingly gorgeous looks. She’s also a freelance software engineer who conducts tutorials, has appeared on several TV shows because of her programming skills and has even done video tutorials on coding for children, co-starring the likes of Bill Gates and Mark Zuckerberg for Code.org!

What’s more, her website reports that she was recently named one of the 100 Women of the Year by Elle UK and AskMen.com and received a “Lifetime of Inspiration” award from Harvard University’s Women in Business organization!

Clearly, Lyndsey is a powerhouse of talent!

However, some men, with pea-sized brains that are full to the brim with misogynistic ideas just couldn’t see past her beauty and appreciate her brains.

When an Instagram account applauded Lyndsey Scott for her coding abilities, the comments were unsurprisingly of a mocking nature.

Here’s a few of them that appear to be trolling her for only being able to do the bare minimum, implying that her achievements were nothing worth applauding. 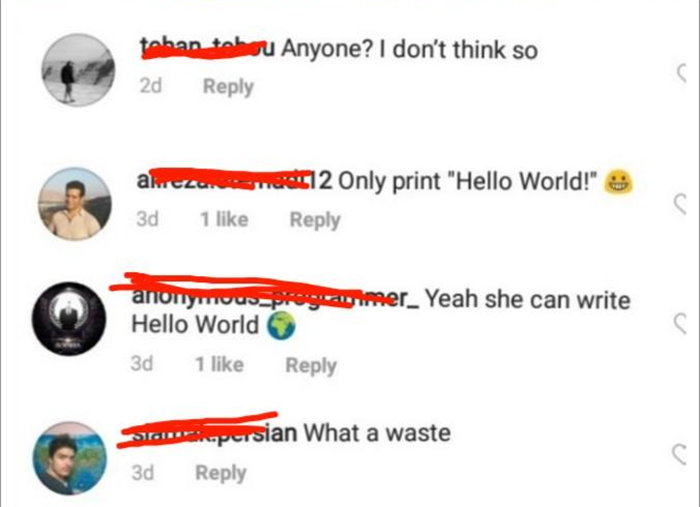 Little did these amateur boys know that Lyndsey isn’t just a stunning model and a really good coder, she is also a badass slayer of trolls who think women can’t be beautiful and total braniacs at the same time!

Her reply to those comments wasn’t just to brag about her own achievements but to prove to men that women are equally if not more competent coders.

She also called out such behaviour as one of the main reasons why women in technical professions are often belittled, causing them to lose morale and quit. 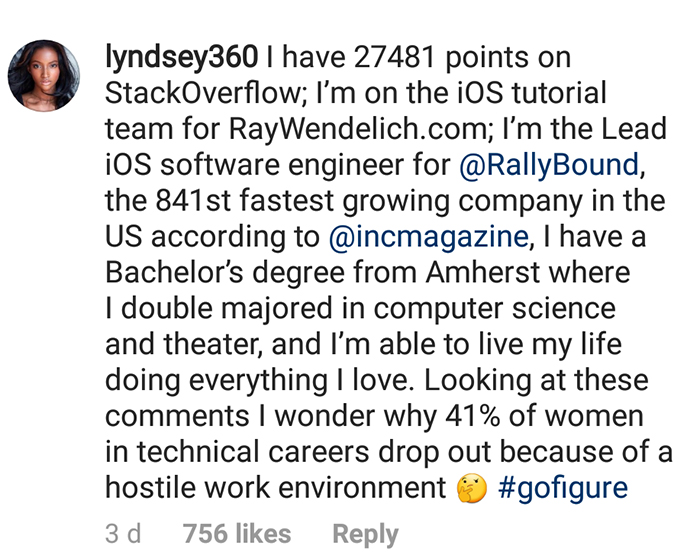 Lyndsey even reposted the Instagram post on her account and explained her decision to engage with the trolls, even though that wasn’t something she’d normally do.

In her caption, she hoped that people wouldn’t ever doubt girls and women in tech fields because they can sure as hell surprise you with their skills.

A Reddit user posted screenshots of the trolls and Lyndsey Scott’s reply to them on a thread, calling out the bullshit belief that woman can’t be smart and beautiful at the same time. And the thread received quite the attention!

Women shared similar bias that they had encountered when they tried to work in tech.

Also, there was an eye-opener on how modelling itself was a gruelling profession that deserved every ounce of respect, just like other professions like, say, coding!

And then, there was this bomb-ass trivia that came with an epic moral at the end!

This guy logic that does not make sense at all!

The above user even dropped in some more info on Lyndsey Scott that should make girls everywhere super proud of one of their own!

And finally, this major movie reference that should put the whole debate to rest once and for all! I mean, come on, if Elle Woods’s life is any proof, don’t underestimate what a woman with an agenda can do!

More power to you, Lyndsey, and to every girl who kills at her job while making sure that perfect manicure is intact!