You were there a second ago.

Nothing in the world can prepare you to live without someone you love so dearly. The notion, ‘time heals the pain’ is a myth. You just learn to get familiar with the idea of not seeing them around, not hearing them or not being able to touch them. The void that losing someone creates in your life, remains.

A Tumblr account called The Last Message Received is dedicated to last texts before death and it has the most heart-wrenching stories you will ever hear. 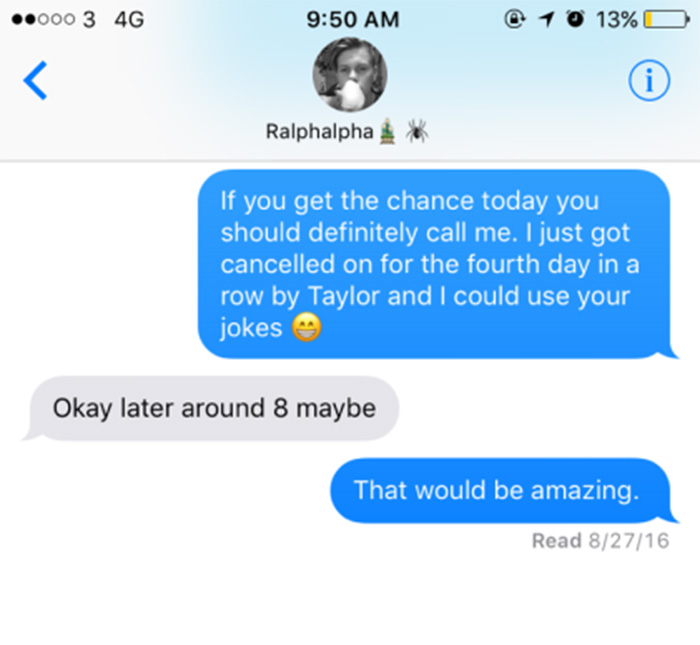 My best friend and the guy I was in love with. Oh god, I miss him. He got into a car crash that night and died instantly. 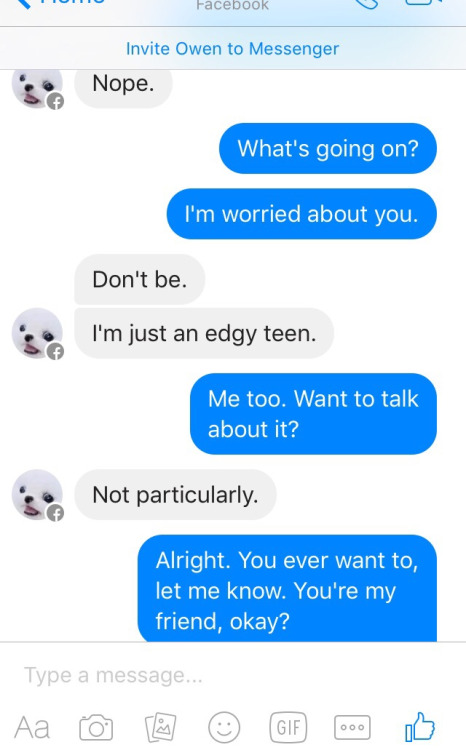 The last message I had with my boyfriend’s kid brother. He shot himself shortly after this. He was 13. I miss you, O. He was family.

The last time I talked to my gramma. She asked me to come see her. I was always busy and never made the time to visit. She was my best friend. I never got to see her before she died. I would give anything now to go back and make sure I had visited her.

4. From my best friend in the whole world.

Last texts from my best friend.
The next morning I missed her call, come to find out she shot herself in the head later that day.
I should have answered. 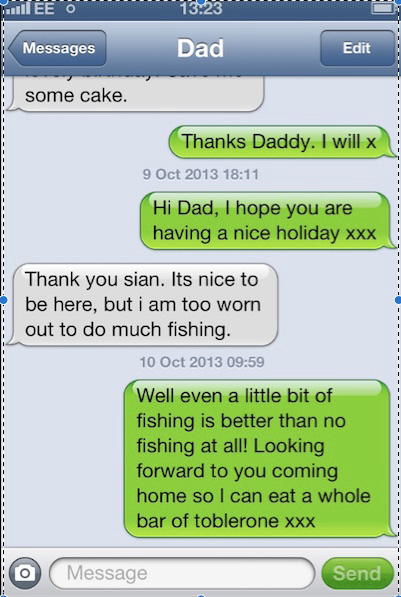 My dad was on his yearly fishing trip with his friends. He was tired because, he had 4 large tumours pressing on his brain and his cancer had spread to his bones.

Two weeks after this message he was told he had eighteen months to live; in reality he only had three weeks. I like to imagine that he never came back from that fishing trip and in many ways he never did.

Dad had been feeling bad for a while after hurting his back. He finally went to the hospital on the day of my daughter’s 3rd birthday party. I visited him in the hospital 2 days later and left after 2 minutes because he was feeling so bad.

He was intubated a few days after this, as I drove up to see him again.  He died a week later. I spent every evening with him until he did. I miss him so much. 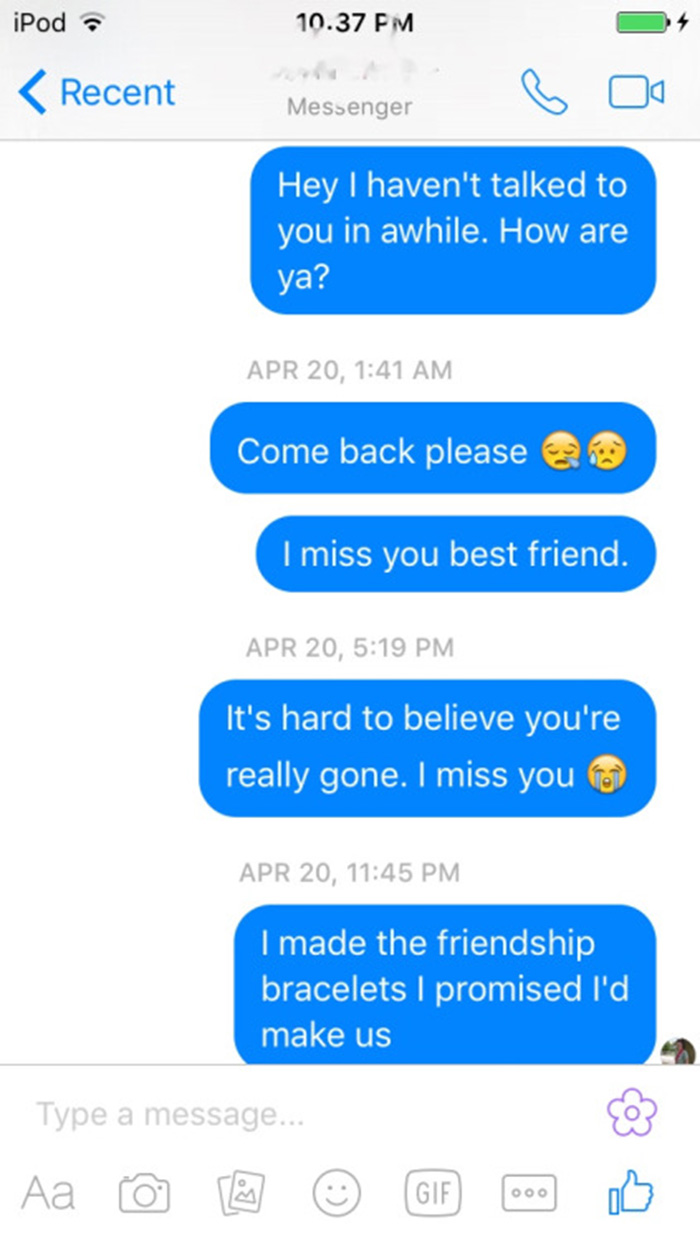 The last message I sent him: “Hey I haven’t talked to you in awhile. How are ya?” Everything after that was sent after he took his life on April 19th. Rip buddy. I miss you.

8. A friend who I had never seen sad.

We were talking about her coming to my birthday party, she couldn’t make it so I thought I’d see her another time. We met in a mental health clinic, she welcomed me into the group of patients, I saw her leave and come back, I saw her happy and loving but also so terribly sad.

She committed suicide in January.
I lost a model and an inspiration, but she won’t be forgotten.

My mum sent me a picture of me with a water bottle balanced on my head. The next morning on my fiancees fire radio I heard a 10-40 (code black) at my parents address. Thought it would be my dad… my mom died from a stroke the morning after she texted. I never responded. Why didn’t I text back?

10. We made love the night before. 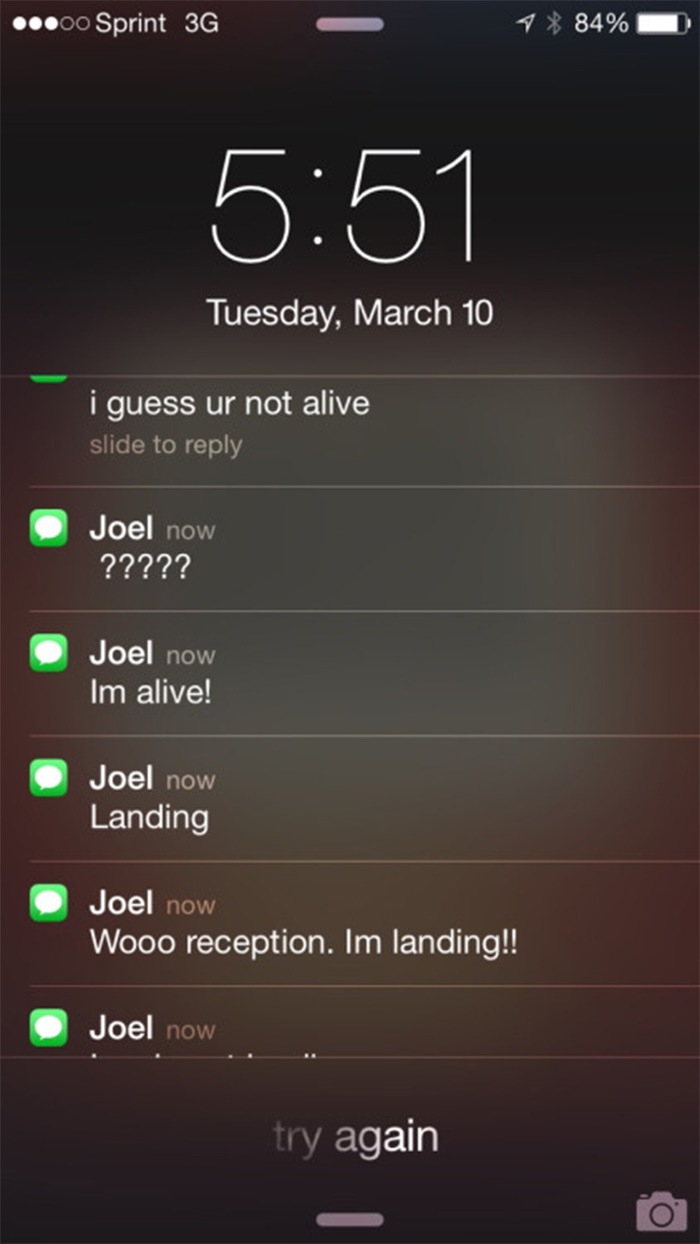 My boyfriend sent me this text when I was picking him up from the airport. We went home made love. And kissed him before I left for work. Then next thing I know it’s 8:00pm and I get a call. He passed away that afternoon. That’s the last memory I have with him. I loved him.

Life is unpredictable, one moment he is there smiling at you, being himself and the other he is gone.
Image and stories from The Last Message Received
📣 Storypick is now on Telegram! Click here to join our channel (@storypick) and never miss another great story.