Kind Landlord Sells His House & Shares The Profit With Past Tenants, People React

While it is popularly believed that landlords and landladies aren’t very friendly, impose several restrictions and in general, annoy their tenants, there are many kindhearted people who go out of their way to make tenants feel at home.

Speaking of which, a man named Chris Robarge, who lives in Massachusetts, recently took to Facebook to reveal how his former landlord sent him a cheque of 2,500 USD (1.8 lakhs INR approximately) after he sold the house.

According to Daily Mail, in a letter sent along with the cheque, the landlord wrote, “As a tenant of the property, some of the rent you paid each month contributed to paying off the principal of my mortgage. I firmly believe that the capitalist tradition of retaining that money after the sale of a property is exploitative and antithetical to a just society.”

He revealed how he tried to keep the rent equivalent to the monthly expenses of keeping the house in order, and added, “I wanted to return to you that portion of the rent you paid. While it’s not much, it’s yours! It was a great house and I’m glad that I was able to share it with you.”

Chris shared a picture of the cheque and the letter on Facebook and wrote, “I have been sitting with this for more than a day and I am still completely beyond an actual way to describe what this act means to me. All that I can say is that there are people who talk about their values and there are people who actually live them, and the reason I wanted to share this is that I want to encourage us all to actually live our values.”

A person I formerly rented from asked me for my current address recently. This person rented me a space in their house…

Not just to Chris, but the landlord also sent money to other past tenants! Chris finally went on to add that he will be giving away $2000 to those who need it and will be keeping the remaining amount.

People online lauded the landlord for being so generous – a trait, they said, that is rare to see nowadays. 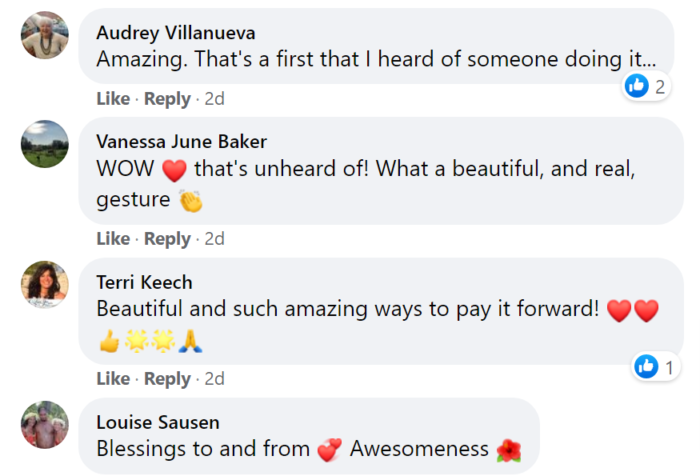 Good to see some really kind people out there! 🙂