“I Am A Mother Too,” Female Constable Lovingly Feeds Homeless Woman & Her Baby In Hyderabad

Even though sometimes we come across chilling events that break our hearts, there are several other incidents that restore our faith in humanity. For instance, recently, a police officer from Telangana went out of her way to help a homeless woman and her newborn baby.

B Rajya, a constable, from Moghalpura police station, not only fed a 19-year-old homeless woman but also took care of her 15-day-old daughter, reports the New Indian Express. It all started when the police received information about a baby being abandoned. Rajya, along with her team, rushed to the spot and found the kid and her young mother, Sana Banu. 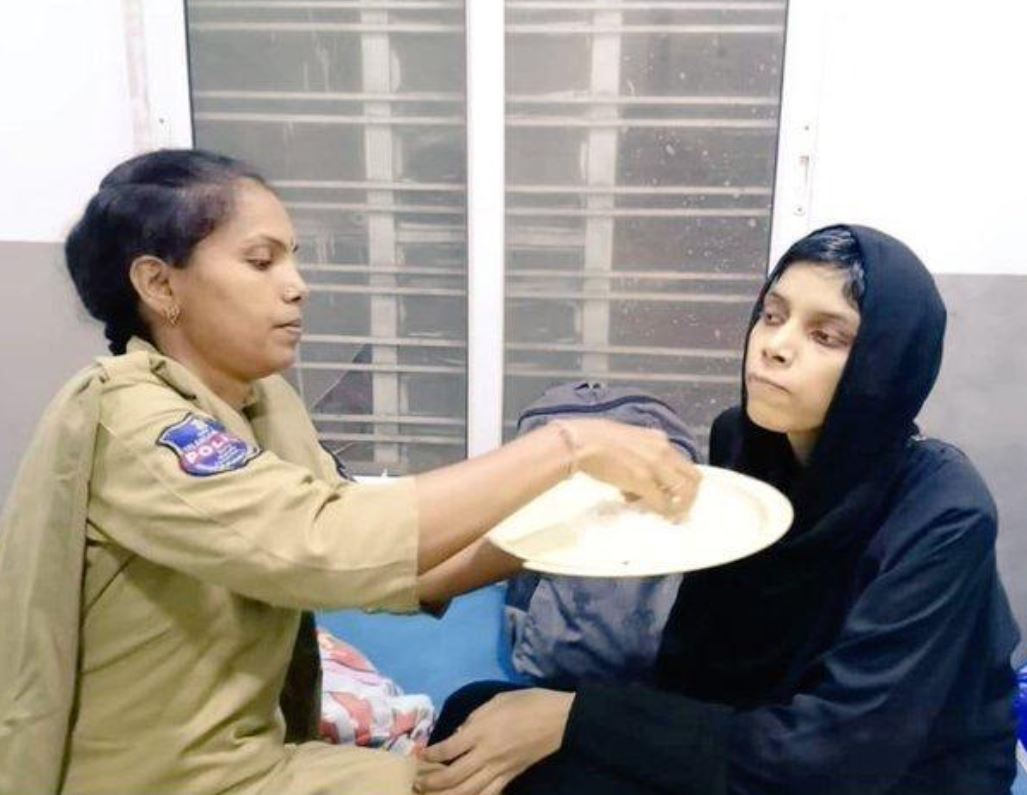 However, the mother-daughter seemed to be in a very poor condition. Hence, the team decided to bring the duo back to the police station. Once there, Rajya took care of them without a second thought. She was quoted saying,

“It looked like they had not eaten anything for days, Banu could not even walk or talk properly. Even when we offered her food, she could not eat and was not even in a state to feed her baby.”

Great gesture, Portraying that 'Only a woman can understand another woman's pain'.
Great to see you all my dear officers, for being so empathetic towards the needy/members of the society.
Thank you Mr. Faisal for bringing this here. https://t.co/mjVT1ewbuH

“I could not bear it. I am also a mother, of a 13-year-old daughter and a 10-year-old son. It felt like my children were in pain and I had to feed them. I fed milk powder to the baby girl and proper food to her mother, who was very reluctant to eat,” added the 32-year-old officer.

As her act of kindness went viral on social media, Rajya said, “I did not expect this kind of love and affection from so many. I did what I felt as a woman and as a constable on duty.”

Her heart-warming gesture was lauded by several people including Police Commissioner Anjani Kumar:

Moghalpura PS found an unidentified lady with 3 months baby without food. Our lady constable officer could not resist herself and brought them to PS and fed them by her own hands. Looking at this eyes became wet of all those present. Felt so proud of the colour of khakhi. pic.twitter.com/1lMAn4EEMa

People of Hyderabad are very different compare to other places,
Specially the police 👮‍♂️ who are very friendly….

“City of Happiness and Brotherhood”

Proud of Hyderabad Police ! ❤️ Salute to you ma’m !
I ❤️ Hyderabad !

This is the way you build Trust with people ! You are setting an example ! Salute
And also this is more of a humanitarian work

Police said Banu is herself an orphan whose husband died when she was just two months pregnant. Ever since then, she had no place to go and was homeless. The cops have now sent the mother and child to an orphanage. During these testing times, such kind gestures by police officers come as a ray of hope. What do you think about the cop’s thoughtful act? Tell us.