Home Entertainment After Shreyas’s Thrashing, KRK Has Stooped To A New Low To Defend...

There are no two ways to say it but Kamaal R. Khan is a bully on Twitter with a blue tick.

I understand the concept of free speech and it’s amazing how social media has the ability to spark debates, unite people and give everyone the power to raise their voice. But that does not mean that you use it to spew hatred and demean anyone. I repeat, ANYONE.

And that’s exactly why KRK is a bully who has never changed his ways. Remember this tweet from 2013 when he cracked the ‘panty joke’ in bad taste on Diana Penty? 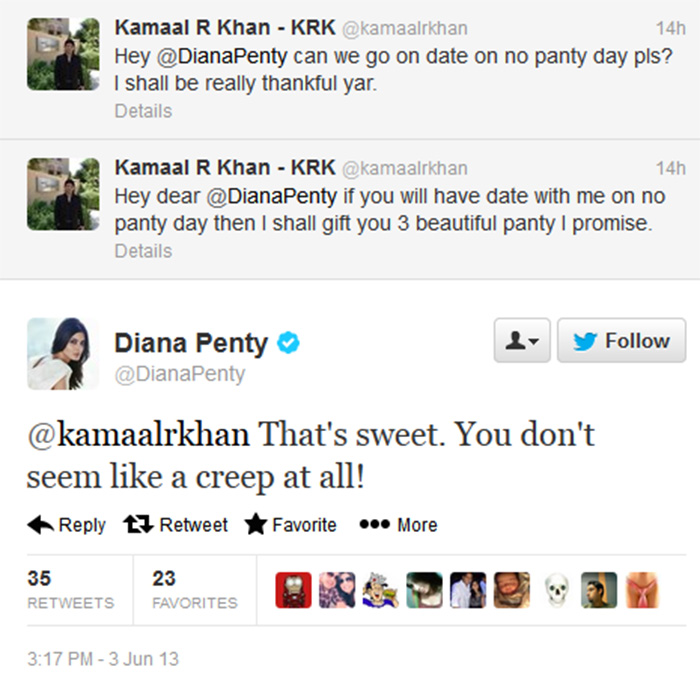 He is a creep, a cyber bully, and a troll. Many stars have taken to Twitter to thrash him and show him his place in a dignified manner.

But as nothing changed. He continued hating, using bad words and demeaning good and hardworking people. But Shreyas Talpade did not tolerate his BS and spoke to him in a language he would understand. But KRK’s hate knows no bounds. I really don’t understand what kind of a person you have to be to say all these things and be proud of it. He tried to defend his moronic review by saying this.

And then again, he pressed his fingers against his qwerty keypad and you know what came out? HATE.

KRK, good people of the internet have always called you out. And there’s a reason. We need people who have a following to speak good things. Influential minds who follow you think that it’s okay to speak in a language that you do and sadly there are 5 million of them.

And NO, IT’S NOT. You have a right to your opinion, but not a right to shame someone for TRPs, views or coverage. Shreyas’s tweet has gone viral in less than an hour of him posting it, and there’s a reason you are getting hate (the exact same thing you sent in the Universe).

You know what’s that called? KARMA.

It’s time to mend your ways because people are not here to take your shit.