If you have been listening to Bollywood songs or watching the films, you will agree that some of them openly propagate toxic masculinity, racism, colourism, sexism among other societal ills. But the audiences today have become vigilant enough to express their disagreement with such plot lines.

And in a recent incident, a song starring Ananya Pandey and Ishaan Khatter named ‘Beyonce Sharma Jayegi’ from their upcoming movie ‘Khaali Peeli’ had to bear the brunt of angry audiences for their racist lyrics, reports News18.

The song that was released on YouTube on Sunday makes a colourist remark on American singer Beyoncé. Its lyrics go like: 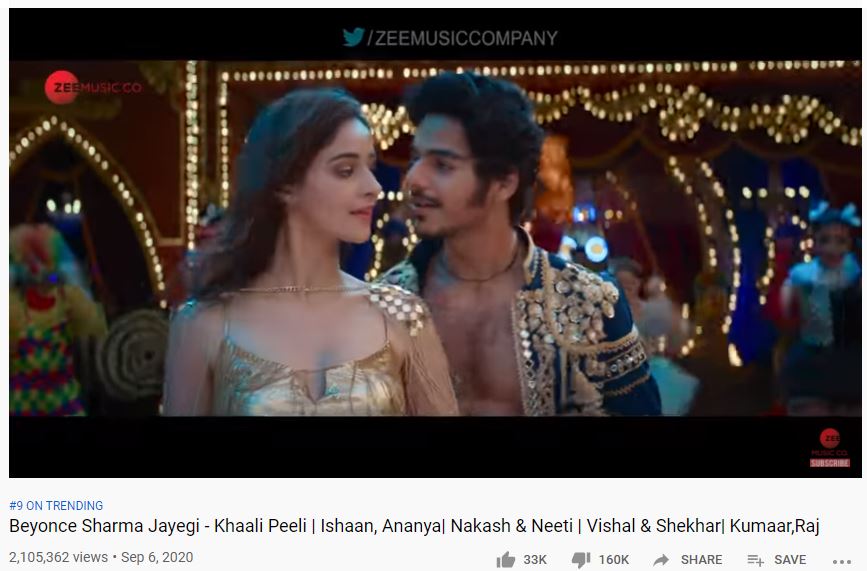 People were outraged on hearing the song and the insensitive remarks on the popular Hollywood songwriter and performer. Hence, they downvoted the song on the online video sharing platform. At the time of writing, around 1 lakh 60 thousand people have disliked the video.

Not only this but people online also apologised to Beyoncé and slammed the makers of the song.

Dear Beyonce,
We are sorry for this. pic.twitter.com/MGZQDoaaiC

'Beyonce sharma jaegi' is the worst ever song i have heard. Seriously @VishalDadlani @ShekharRavjiani never expected this from you guys. Such a racist and derogatory remarks in the song. Be a music director rather than an activist on twitter. #KhaaliPeeli #BeyonceSharmaJaayegi

Wait what
Do they even know who @Beyonce is
What is this #BeyonceSharmaJaayegi ?
Seriously!!!
Duhhh!! pic.twitter.com/RwyolVcMNn

The way racism is so normalised in bollywood and in Indian Gp
ISTG I showed my mom the video and she was like what's wrong with it
"Oh tujhe dekh ke GoOriYa Beyonce bhi Sharma jaayegi"
I'm..
Mujhe duniya tyaag deni hai

Beyonce sue them for defamationpic.twitter.com/21gbj4lMaK

Worst composition of @VishalDadlani @ShekharRavjiani #BeyonceSharmaJaayegi sorry guys i cant handle it. I stop it to 1:11 and dislike it.

I loved @VishalDadlani and @ShekharRavjiani 's songs..but this time it wasn't expected from them at least d way they created the song #BeyonceSharmaJaayegi
How could we even respect you when you are supporting white people over black even though when u support #BlackLivesMatter

Waiting for Beyonce to file a case…. https://t.co/VrQrf1xqd0

The comment’s section of the song on YouTube was also flooded with comments where people are calling out the racism.

Well, I fail to understand that at the time when several people, including Bollywood celebs, are advocating movements like #BlackLivesMatter and openly talking about India’s unjust obsession with fair skin, how songs with such insensitive lyrics are still made? What do you think of this incident? Tell us.