‘I Have Failed Too’, Says Kerala Teacher After Student Fails In Board Exams

I remember how during my school-going days, teachers would look down upon students who didn’t do well in a few subjects. Which is why failing was an option all students had to strike out because if we are seen as intellectually inferior on being ‘weak’ in a few subjects, failing meant a kala dhabba for life! We only wished for teachers who could be more accommodating to the idea of failure.

Like this one teacher from Kerala, VP Prabhakaran, the principal of a school Kozhikode, who took to Facebook to post a heartwarming note after one of his students failed in an exam. According to News18, he asserted that it wasn’t the failure of the boy alone, but the failure of his teachers as well.

The results for the Class-10 board exams recently came out and there was only one student who failed. The principal didn’t call the rest of the students but called the boy who had failed to check on him to see if he was okay.

“I feel I am the other person who failed along with him,” he wrote.

VP Prabhakaran mentioned how he along with other teachers had thought that no one would fail this time. They paid extra attention to students who needed help. Some couldn’t write the alphabets properly. He recalled how every student was taught with so much love and care.

“Maybe those kids have never experienced this love in life before. The teachers may never have got a chance to give such a stage and care,” he wrote.

“Maybe there was something lacking in the way we cared for the student because all of us teachers also failed with him,” he added.

Later in his post, he went on to question the idea of success and defeat. He claimed how many successful people in the world didn’t go to school.

“What are victory and defeat? All the success is celebrated when we get 100%. But we know many people who have failed in exams but have become a big success in life later.” 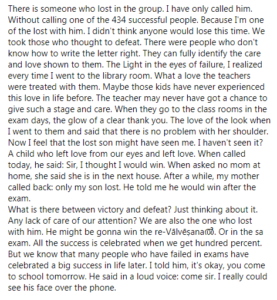 People on the internet are lauding the teacher for his approach towards failure and his supporting nature. Many expressed how the students are fortunate to have found a mentor like him! 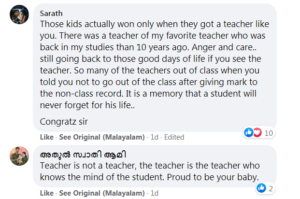 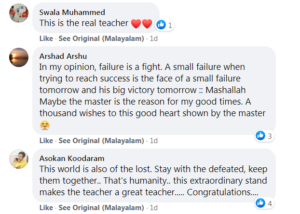 We need more teachers like him. Don’t you agree?